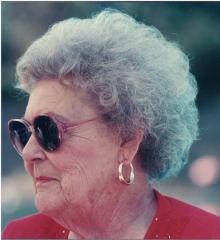 Constance M. Poiry passed way Tuesday morning, March 13, 2012. She is survived by her four sons Gib, David, Gregg and Phil, two grandsons Jonathan and Christopher and two daughters-in-law DeeDee and Tracy. Connie was born October 11, 1917 in Fort Wayne Indiana. She attended St. Catherine's Academy in Fort Wayne, Indiana. Later she volunteered time with the Sigma Beta Sorority, a national philanthropic organization. Connie met Ken in 1935, they married a year later and celebrated their 75th Anniversary last year. Connie dedicated her life to her husband and to the task of raising four sons. In 1959 the family relocated to Torrance California from Indiana for a milder climate as Connie contracted polio in the mid 1950's and could no longer stand the harsh winter weather of Indiana. Connie always enjoyed hobbies including tole painting, stained glass work, holiday paintings, resin works and truly enjoyed collecting Hummel Statues. Connie and Ken also enjoyed constructing "Tiffany" style lampshades. Connie also had a soft spot in her heart for an organization—STAR where she volunteered her time and talents. She was one of the original founders of the organization. STAR exists for the good of our mentally challenged citizens. In lieu of flowers we know he would want donations sent to STAR, PO Box 1075, Torrance CA 90505. There will be a Vigil (Rosary) for Connie at St. Lawrence Martyr Church at 7:00 pm on Tuesday, March 20, 2012 and the funeral mass will be celebrated at 10:00 on Wednesday March 21, 2012 also at St. Lawrence. A reception to celebrate her life will be held in the church hall immediately following the Mass. St. Lawrence is located at 1900 South Prospect Ave., Redondo Beach, CA 90277.