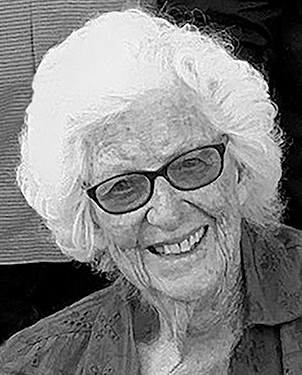 Connie (Salmon) was born at Good Samaritan Hospital in downtown Los Angeles. She grew up in Hermosa Beach – hence her love for the beach – while flirting with the movie industry as Constance Le Varr in several films. In 1941, she met her husband, Frank Schroer, at a beach party, and on January 30, 1942, they were married. (Her mother said it would never last!) They bought a home in Redondo Beach, where Connie became a stay-at-home mom in 1944 when her first child, James, was born; followed by David in 1946, and then Christine in 1951.

In 1955, Connie taught dancing for several years at the Linkletter-Totten Dance Studio before becoming a Pharmacist Assistant at Guild Drug. In 1965, with her two sons out of high school, Frank and Connie, with daughter Christine in-tow, bought the Lodge in Green Valley Lake, California, a market/hotel combination, which housed the post office inside the store; Connie soon became the Postmaster.

In 1968, they sold their store and moved back down the hill, settling in Carson, where Connie continued her Pharmacist Assistant career until she retired in 1987. At that time, both Connie and Frank began volunteering at Little Company of Mary Hospital, in Torrance, where she received her twenty-five years-of-service pin before having to end her volunteering “career”.

In March of 2016, Connie sold her home of forty-six years and spent the next five years in assisted living facilities.