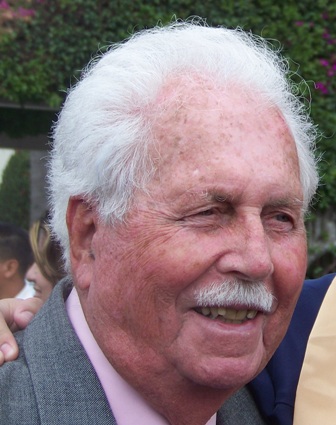 Clifford R. Rainey, 90, passed away peacefully in the company of his loving family on Sunday evening, January 7, 2018. Clifford lived in the South Bay for over 60 years. He was raised and educated in Birmingham, England and worked as a Mechanical Engineer in the Roofing Industry for 28 years in Vernon, California. Clifford married his beautiful sweetheart Rose, in England in 1953 and the two sailed on the Queen Elizabeth and arrived in New York. They lived a short while in Toronto, Canada and drove with friends across the United States and finally settled in Los Angeles, California. They were married for 64 years. Clifford was a man of many talents. He was a builder, a soccer coach, an avid golfer, loved lawn bowling and a ballroom dancing. He could play a few songs on the piano, and draw and paint with oils. He and his wife attended American Martyrs Catholic Church in Manhattan Beach. Clifford was a humble man and a proper English gentleman. He shared Christ-like love to everyone he met. He is survived by his wife, Rose, his son Michael and daughter Rose Ann and their spouses and two grandchildren, Kimberly and Michael Anthony, his sister Jean Harley and family and nephew Mark Rainey and family. A Viewing and Rosary will be held at Rice Mortuary, 5310 Torrance Blvd, Torrance, California on Tuesday evening, January 16 from 5pm to 9pm with Rosary at 7pm. A Mass will be held on Wednesday morning, January 17, at 10am at American Martyrs Catholic Church, 624 15th St, Manhattan Beach, California. A Private Burial will be held at Holy Cross Cemetery.