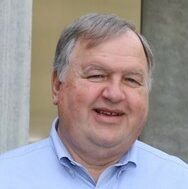 In February of 2022, Clauson Timothy Smoot passed away peacefully in his home in Torrance, California. Born in Baltimore, Maryland on May 25, 1945, Tim excelled at school enough to earn a scholarship to Harvard University, class of 1967. Upon graduation, Tim spent time in the Peace Corps, and then as a math teacher at Northwestern High School, where he met his first wife, Patsy Vyner. Together, they lovingly adopted their former student, Cassandra Holmes, and assisted her through college. Tim went on to study at Indiana University Law School, graduating in 1976, and was admitted to the Maryland bar that same year. He soon joined the Securities and Exchange Commission, proudly battling white collar crime and defending consumers.

He met his second wife, Candace Dickerson, in the DC area, adding her two children, Jennifer and David Lee to his growing family. After leaving the SEC, Tim practiced Law in Chicago, and finally in California, meeting his third wife, Debra Cucci, and adopting his fourth child, Kelsey Smoot.

While Tim grew up in a household sometimes lacking of compassion, he yet forged a life finding avenues for his practice helping people, and practicing compassion toward those around him.

He is survived by his sister Jan Hiester (Art), and his four children and eight grandchildren: Julian, Ariana, Alexandra, Hailey, Sammy, Nicholas, Samantha and Ashleigh, and many nieces and nephews. He will be dearly missed and fondly remembered.

Private services will be held on Maryland’s Chesapeake Bay at a later date. The family deeply appreciates the support of the staff at the Brookdale residence and the kindness of “Timmy’s” friends and bridge buddies there. In lieu of flowers, donations may be made to Harmony Project, an organization dear to him and one he directly worked with and supported for years.