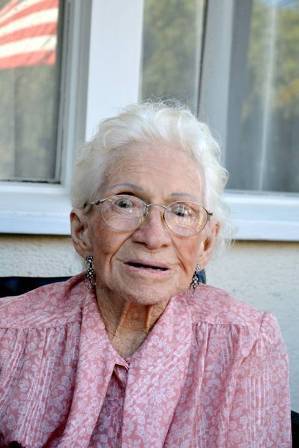 Chlodell Booty Age 89 of Hermosa Beach, California Passed away peacefully at 1:44pm on Monday, 12/22/2014 at her residence. Chlodell was Born 11/11/1925 - Veterans Day, in Donie Texas to parents Walter and Annebell Hall. Chlodell Grew up in Teague Texas until she left home at 17 to work for the Naval Air Station in Corpus Christi, Texas and repaired WWII planes coming back from the war effort as a real life 'Rosie the Riveter". She moved to California in approx 1945 and later married Lawrence Booty and gave birth to their son Walter. She joined her husband in his hobby/sport of building and racing drag cars, and herself won trophies racing. She embarked on a career as an electronic assembler in the local South Bay area Aerospace industry, working for Hughes Aircraft, Northrup Grumman, and TRW. Chlodell retired from TRW after a long employment which included being part of the team that built the Pioneer Space Probe launched in 1972 that was the first man-made object to fly-by Jupiter and leave our solar system. Chlodell loved to spend time with her family in Texas and she loved to travel. Hobbies included embroidery, and hand making clothing and accessories for Barbie dolls. Everyone that saw her remarked how adorable she was, and everyone that knew her immediately fell in love with her. Preceded in death by parents, Walter L. Hall & Annabell Hall, three brothers, Loyd Hall, Earl Ray Hall, Hugh Dean Hall, one sister, Gloria Hall Bond, and husband Larry Booty. Survived by two brothers, Gaylon Hall & wife Ruthe of Teague, Tx., Lane Hall & wife Marla of Teague, Tx., and numerous nieces & nephews.