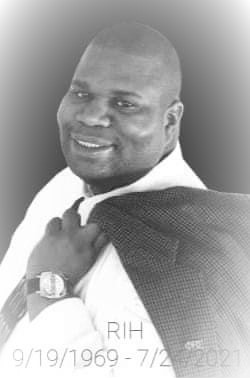 The family of Charlie Bernard Wade, Jr., wishes to express our most sincere appreciation for the many kind expressions of love extended during our bereavement and over the course of his illness. Your caring efforts, thoughtfulness, and your presence at the care facility, viewing, and life celebration service have lifted our hearts and has confirmed how well-loved Charlie was. All of these we shall treasure for as long as memory shall last.

“To everything there is a season and a time to every purpose under the Heavens…” – Ecclesiastes 3:1

A Time to Be Born – In God’s omnipotent wisdom and divine orchestrated plan this day was ordained to be, thus the spiritual ushering in and the birth of Charlie Bernard (‘Nard’) Wade, Jr. on September 19, 1969.

In Memphis, Tennessee, reared and nurtured by his parents, Charlie Sr. and Ruth Johnson Wade.  He was the youngest child born to this union.  Charlie began his assignment on earth as one of God’s chosen vessels.

A Time to Learn – ‘Nard’, as he was affectionately called by those who knew and loved him attended public schools in Memphis, Tennessee and further his educational goals at Tennessee State University earning both Bachelor and Master Degrees.  After relocating to Los Angeles, he attended Cal State Dominquez where he earned his certification to teach in the state of California.

A Time to Educate – He was employed by the Los Angeles Unified School District.   There he worked at various schools and grade levels.  At the time of his transition he was a teacher at Charles Barrett Elementary School.

A Time to Worship – Charlie accepted Jesus Christ as his Savior and Lord at an early age at the Trinity All Nations Church in Memphis, Tennessee; under the pastoral care of Reverend Robert E. Berry

Charlie later united with the Mount Moriah Baptist Church of Los Angeles, Inc., under the pastorate of the Pastor-Emeritus Dr. Melvin V. Wade, Sr.; and, God allowed him to witness the new season of pastoral leadership of Reverend Johnteris Tate in 2017. His faithfulness to Mount Moriah is a great testament in time, talent and treasure as a dedicated member.

Over the course of his membership, Charlie participated in the Sunday Church School – Young Adult Class, Usher Board III, the youth and young adult activities and served on the coaching staff of the Melvin V. Wade – Annual Summer Basketball Camp.

A Time to Relax – Charlie enjoyed deep sea fishing, sports and kicking it with the boys.  He was a season ticket holder for the San Diego Chargers and an avid member of Fantasy Football League.

One of Charlie’s last acts of service was share to us by his sorority sister Royetta Perry.

“Charlie Wade (my birthday twin) called me in December 2019 with sheer excitement about our upcoming Centennial Grand Boule’ in Washington, D.C. He reminisced on when he was an undergraduate and how his frat brothers blessed him to be able to attend his first Conclave and from that experience, he never missed a Conclave and of course the most memorable was Phi Beta Sigma’s Centennial Conclave.

He asked me how much would it cost for an undergraduate to attend the Zeta’s Centennial Grand Boule’? I shared what the registration cost was. He said, “I want to know the total cost – registration, airline, and host hotel for the entire conference”. So, I gave him an estimate of $2,000.

He said “Soror Perry, I would like to sponsor an undergraduate Zeta to attend your Centennial Grand Boule’, can you help me with this?” Of course, I told him yes. He humbly insisted that his donation be anonymous.

In March 2020, FGTP presented the “Pay it Forward” award, an all-expense paid trip to Zeta Phi Beta Sorority’s Centennial Grand Boule’ to an undergraduate Zeta. I came up with the name of the award because Charlie wasn’t looking to be paid back but hoped that the recipient would just Pay It Forward and help someone else – “when you can’t pay it BACK, pay it FORWARD.”

When our Centennial Grand Boule’ in Washington, D.C. was canceled, the undergraduate returned the funds to FGTP, (and have since graduated). I immediately called Charlie and asked if he wanted me to send the money back to him, he said “no, save it for the next Boule”.

Well, on behalf a From Girls to Pearls, Inc., we will honor his wishes and award an undergraduate Zeta with the Charlie B. Wade, Jr. “Pay It Forward” Memorial Award – a $2,000, all-expense paid trip for the 2022 Grand Boule in Philadelphia.”

A Time to Die – God in His wisdom grants us the privilege of sharing time with one in whom he has placed many talents.  Certainly, our lives have been enriched by our experiences with Charlie.

On Saturday, July 24, 2021 he was awarded his wings and took flight to Heaven.

On Saturday morning after Charlie’s transition, you can hear his fraternity brothers saying “Step-On into Heaven, Smooth as Suede Charlie Wade” as the Freemasonry shout out “So Mote it Be”!  Finally, his brothers of 2/2 shouting “Rest Easy Slow Motion, 2/2 The Black and Blue”!!

Charlie Bernard Wade Jr. dedicated his life to serving others. He taught for over 23 years, traveled the world, and did all the things that he desired. In his last days Charlie said that he had no regrets and was at peace. He prayed and spoke to God, and His lord said unto him, ‘Well done, thou good and faithful servant. Thou hast been faithful over a few things; I will make thee ruler over many things. Enter thou into the joy of thy lord.’