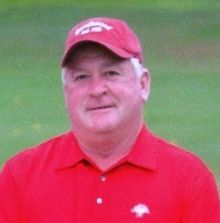 Charles Patrick O'Regan (March 3, 1950 to March 9, 2012) Charles ("Chuck") was born to James and Lucy O'Regan in Park River, North Dakota. He leaves behind a loving family; wife of 26 years Melanie (Revels), daughters Amy Salter (Rick), Janis Lake (Scott), Heather Wilson (Nathan), Whitney and son, Ryan. Chuck adored his 8 grandchildren: Samantha, Madison, Laney, Travis, Charlie, Grant, Jack and Lucy. He was the youngest of three, survived by his brother James O'Regan of Owatanna, Minnesota and his sister, Mary Wickes of Bismarck, North Dakota. Chuck served in the United States Army from 1969-1970, stationed in Korea, where he played fast-pitch travel softball. He received his Associate of Arts Degree from Long Beach City College, where he studied electrical engineering. He went to work at the University of Southern California in 1975, embarking upon his 37 year career, most recently in the capacity of Executive Director for Facilities Management. He was an integral member of the Trojan Family, leaving behind a strong legacy due to his dedication and devotion. Chuck was passionate about his family, his job and his favorite hobby - golf. He could be found at his home course, Candlewood Country Club, every weekend. He was presently serving in the capacity of President of the Board of Directors. He touched the hearts of many and will be missed by all. May his memory be eternal. A memorial service will be held on Wednesday, March 14 at 7:30 p.m. at Rice Mortuary, 5310 Torrance Blvd., Torance, CA 90503. The funeral will be held on Thursday, March 15 at 10:00 at Saint Lawrence Martyr, 1950 Prospect Avenue, Redondo Beach, CA 90277. In lieu of flowers, donations can be made in his name to Saint Sophia Greek Orthodox Cathedral, Building Fund, 1324 S. Normandie Avenue, Los Angeles, CA 90006.