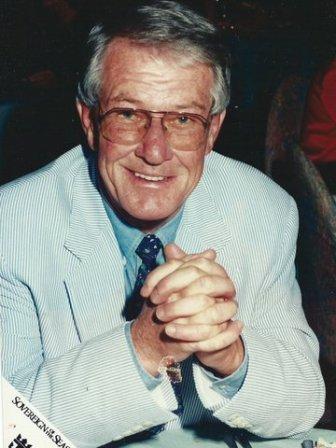 July 17, 1931 – June 6, 2013. Charles Howell Carlson, 40-year resident of Manhattan Beach and more recently, Redondo Beach, passed away peacefully at home. Chuck will be deeply missed by his friends and loving family. He is survived by Estelle, his wife of 38 years; their daughter, Kyla Carlson of Redondo Beach, CA; and four children from his previous marriage to Bernice Carlson: son, Adam Arthur Carlson of Sacramento, CA; son, Antony Charles Carlson and wife Michelle of Kauai, HI; son, Andrew Edward Carlson and fiancé Amelia McCarthy of Boston, MA; son, Sean Michael Carlson (who preceded him in death); and his two granddaughters: Zoe and Mazy. Born in Jerome, Arizona to Dr. Arthur C. Carlson and Maude Howell Carlson (Noyes), he attended Harvard Military Academy in Los Angeles and Cottonwood High School in Clarkdale, Arizona. He graduated from Menlo College and then studied at Pasadena Playhouse, graduating in 1952. He did basic training at Parks Air Force Base before serving a tour in Korea. Returning to civilian life in 1954, he moved to New York City and began an acting career that included summer stock at the Straight Wharf Theater in Nantucket, national tours and prominent rolls on Broadway. When his agent moved to Los Angeles he encouraged Chuck to follow him. In Los Angeles he had a 40-year acting career with numerous television commercial and voice over credits. Despite being born in the desert and spending his early years on the family ranch during summers herding cattle and riding horses, Chuck had an affinity for sailing and sailboats. In the 1970s he owned and operated a shipwright in Marina del Rey, California and built numerous custom crafts, including an open ocean catamaran for actor, Buddy Ebsen. In the 1980s he invented and produced an exercise device, The "Cranker," which showcased his impressive design and woodworking acumen. Chuck's warmth and generosity were legendary; he was in constant search of ways to help others. He was always happy to lend advice or the right tool for the job. No party on the street where he lived passed without Chuck preparing and serving his renowned chili. His dahlias were legendary and it was not infrequent for buses of tourists to stop near the house so passengers could take pictures of his prize dahlias which he also loved to share with neighbors. He could not pass a homeless person without offering a donation. Chuck and Estelle loved to cook and regularly prepared massive feasts for family gatherings at the holidays. When he wasn't tending his garden, grinding in his shop, or quoting Shakespeare, he loved to spend time with his children and grandchildren. Chatham, Massachusetts on Cape Cod, where his mother lived for many years, was among Chuck's favorite places, particularly in the summer. He was a longtime member and supporter of Stage Harbor Yacht Club in Chatham, Massachusetts. An Open House will be held at Chuck and Estelle's home in Redondo Beach on June 30th. A private service will also be held in August in Chatham, Massachusetts. In lieu of flowers, donations may be made to Trinity Care Hospice and/or the American Cancer Society.