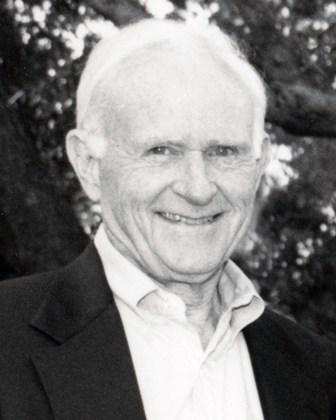 Charles Denby McDonough June 3, 1919-March 17, 2012 Charles (Charlie) McDonough was born in Watertown, Massachusetts, the second oldest of four children to Helen Hardin McDonough and Joseph McDonough. After his family moved to Boston, Charlie attended Our Lady of Perpetual Help Elementary School and Mission High School, where he played baseball, captained the debate team, and was valedictorian. Charlie started at Boston College before serving in the U.S. Air Force Weather Squadron. He was stationed in northern Africa, Egypt and Iraq. One favorite memory of Charlie's from this time was when he went with a group of soldiers to Rome and was honored to personally meet with Pope Pius XII. After the war, Charlie attended the University of Southern California, majoring in Accounting and Finance. He graduated with honors in 1949. Soon after, Charlie went into business for himself, eventually relocating his CPA firm to Torrance in 1967. He led his firm, Charles McDonough Accountancy Corporation, until last year, the firm continuing under the direction of his partner, Greg Wilson. Charlie had employees and clients who stayed with him for many years, and whom he considered family. In 1954, Charlie married Nancy Waters, originally from Minneapolis. They would have been married 58 years this September. Nancy and Charlie are long-term residents of Palos Verdes, having moved there in 1959. In addition to Nancy, Charlie is survived by his children Cassie (Bill) Wilkins, Pamela (Eric Reichard) McDonough, Carolyn (John) Smith, and Scott McDonough and grandchildren Kate Wilkins; Nick and Cara Reichard; and Stephanie (Sam) Dyer, Hilary, Ellie, Abby, and Sophie Smith. Charlie was very involved with his church and many other professional and community organizations. A founding member of both St. John Fisher Parish and the Del Amo Rotary Club and the founder and first president of the Mesa Palos Verdes Homeowners Association, Charlie was also a Planning Commissioner for Rolling Hills Estates and Vice President of the Board of Trustees of the Little Company of Mary Hospital Foundation. He served on the Board for 17 years. He actively participated in the Rotary Club, holding many positions, including President, Treasurer, and the long-standing Chair of the Financial Oversight Committee. During his years at Saint John Fisher Church, Charlie felt particularly proud of his accomplishments as a member of the Finance Committee. Charlie was a long-time member of the South Bay Estate Planning Council. He also served as a Director in the Los Angeles Chapter of the California Society of CPA's. Charlie loved sports. He hated to miss a Dodgers or Angels game and watched the Red Sox whenever he could. While only an occasional golfer, he got much pleasure from his one hole-in-one. He also loved the movies, and for years he and Nancy were avid moviegoers. He was a gentleman, always courteous to others and interested in hearing about their lives and interests. Charlie (Dad and Pop-Pop) was loved, honored, and admired by all his family. Nancy was devoted to him and he to her. His children (and sons-in-law) adored him and looked up to him for his intelligence, honesty, and sense of justice. His grandchildren, just now starting out, will remember him not only as a beloved and loving grandfather, but as an example of a life well-lived. A memorial Mass celebrating Charlie's life will be held on Saturday, March 31, 2012 at 11:00 A.M. at St. John Fisher Catholic Church, 5448 Crest Road, Rancho Palos Verdes, CA, with Msgr. David A. Sork presiding. A reception with the family will follow in Barrett Hall, located on church grounds. In lieu of flowers, donations for the cause of polio eradication may be sent in Charlie's name to the Rotary Club of Del Amo, P.O. Box 3927, Torrance, CA 90510.