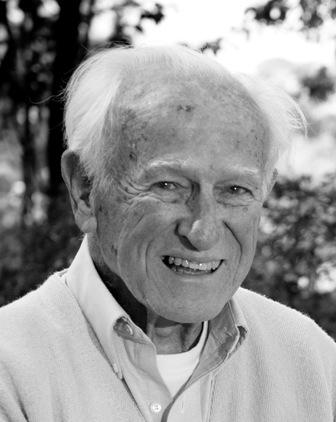 Charles David Smith, a 43-year resident of St. Petersburg, FL, passed away peacefully at home after a brief illness on Tuesday, December 25, 2012 in Torrance, CA. Born in Philadelphia, PA, Charles was 95 when he died. A long-time member of the Religious Society of Friends (Quakers), Charles loved poetry, the study of philosophy, analysis of investments, and outdoor adventures, especially the summers he spent at Back Log Camp in the Adirondack Mountains. He was educated in public schools in Camden County, NJ, graduating from Merchantville HS in 1934. He went directly to Strayer's Business School, and was employed by several businesses from 1935 to 1942. He was drafted in June 1943, and served three years in the Civilian Public Service as a volunteer "human guinea pig" in Ancel Keys' study of human starvation. In 1946 Charles volunteered as a "seagoing cowboy", tending livestock being shipped to Europe. He then attended Swarthmore College, followed by graduate school at Cornell University. He taught Economics and History of Western Civilization (1950-1968) at Cornell University, Wabash College, the University of Florida, and Florida Presbyterian College (renamed Eckerd College) in St. Petersburg. He went on to become a consultant in municipal finance at William R. Hough and Company in St. Petersburg until his retirement in 1983. He then became a member of the Academy of Senior Professionals at Eckerd College, 1983-2006. In 2006, the Smiths moved to Torrance to be near family. After his passing, his ashes were returned to the Adirondack Mountains. Charles is survived by his wife of 59 years, Mary Hervey Smith of Torrance, CA, formerly of Geneva, NY; his four children: Barbara Foster of Herefordshire, England; Kathryn (Gregory Brown) Smith of Central Square, NY; Laurence (Suiko Fukushima) Smith of Seal Beach, CA; Patricia (David) Lewis of Torrance, CA; one nephew, and five grandchildren. He was preceded in death by his parents, Charles and Jean Smith, and his brother, Truman. The family would like to thank the many people who sent their sympathies and remembrances of Charles.