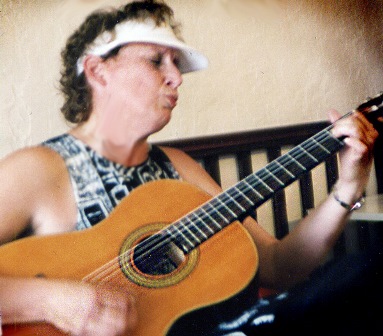 Catherine "Cathy" Adell Ricards, a 20 year resident of the South Bay and Santa Barbara, passed quietly away on Wednesday, April 3, 2013 at Little Company of Mary in Torrance at the age of 59. Born and raised in Bakersfield, Cathy where she, in turn, raised her son, Adam. She moved to Redondo Beach in the early 80's to work with her mother in their marine fabrication and canvas business, The Boatique, eventually taking over the business when her mother retired. She lived on her boat with longtime companion, Stefan McDonald, for over ten years in King Harbor-she loved the ocean and boating and was known by many in the harbor area. She was a popular singer often entertaining crowds of fans in the restaurants on the International Boardwalk in Redondo and elsewhere in the South Bay. In 2002, they moved to Santa Barbara to be close to her sister and mother. In 2009, they returned to Torrance to care take Stefan's mother. Cathy's love was music. She had been collecting, organizing and posting on Facebook the history of her mother's incredible career as a Dixieland, Jazz and Blues singer and pianist. She also promoted her son's engaging music as a solo artist and as a member of the Underground Cows which included Cathy singing backup vocals and playing guitar. Cathy had numerous longtime friends, many who credit Cathy with changing their life, even saving their life with her personable and direct advice and big, caring heart. Her pride and joy in life was her grand-daughter, Jazzlyn and her two grandsons, Michael and Logan. Cathy will be missed by so many. Catherine is survived by her son, Adam Ricards, his wife Adrian and their daughter Jazzlyn of South Lake Tahoe, NV, and Adam's sons Michael and Logan of San Diego, CA ; also her sister, Gaile Baratto of Santa Barbara, CA; and long-time companion Steve McDonald of Torrance, CA. And, her beloved cat, Yakko. She was preceded in death by her parents, Kenneth and Pearl Rose Wohlgemuth Schmedding. An open house celebration of Cathy's life will be held on Saturday, May 4th between 1 pm and 5 pm at the McDonald residence in Torrance, In lieu of flowers, donations may be made to your local cat rescue program.