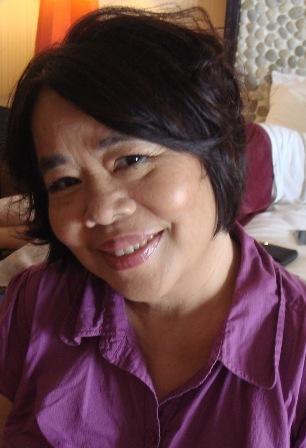 Carolina "Carol" Isip-Fajardo, was born on August 25, 1947 in Manila, Philippines to Teofila and Tomas Isip. She was the eldest of six and is survived by her siblings, Fe (Apolonio-dec.) Magat, Rene (Dudie) Isip, Elvira (Sid) Magat, Rebecca (Mario) Laureta, and Rudy (Laura) Isip. She graduated from the Philippine College of Commerce in 1963. After five years of courtship, she married her pen pal, Miguel "Mike" Fajardo on March 19, 1972. In November 1972, she was reunited with her husband in the United States and eventually resided in Carson, California. Her very first job in the United States was at Pepsi-Cola. After a year at Pepsi, she worked at Elixir Industries for 25 years. She also obtained her real estate license and worked at Century 21 - Amber Realty. She was a devoted Catholic, amazing mother to three kids, Medelyn (Jason) Collado, Melissa (Michael) Sales and Alvaro Fajardo and a proud grandmother to three energetic grandsons, Noah Orion Collado, Lucas Marcelino Collado, and Myles Jacob Sales. She surrounded herself among family and friends and always threw great parties and family softball games in the summer. She was always known for wearing her signature color: Purple. In 2009, she was diagnosed with hydrocephalus. Although a long and arduous journey, she met many angels and touched many hearts with her willing spirit. She will be deeply missed by her family and friends. Carol passed away peacefully at Charlou Guest Home in Anaheim on Tuesday, May 13, 2013.