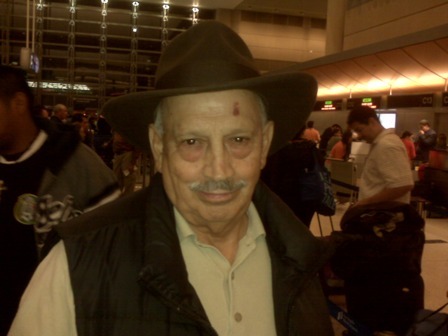 Carlos Torres Huante was born in Uruapan, Michoacán, Mexico on Sept. 14, 1935. He was the fifth and youngest child of Socorro Huante (Father) and Ernestina Torres (Mother). Carlos grew up in Zacapu, Michoacán and Mexico City. In 1955, his parents arranged for him to immigrate to the U.S. to join his older brother, Jorge Huante. In 1958, he met Consuelo Dominguez at a church fundraiser in Hermosa Beach, CA and they eventually married on April 25, 1959 at St. James Church in Redondo Beach, CA. Carlos and his wife, Consuelo, lived in Redondo Beach and had five children. He worked at International Light Metals Corporation in Torrance, CA until 1993, when he retired. A dual citizen, he travelled extensively during his retirement between the U. S. and Mexico. In addition to travel, he engaged in many activities during his spare time, such as archery, body surfing, dancing, dining out and trying out different ethnic foods - his favorite was Chinese. He also attend his sobriety programs and went to the movies. He particularly loved Sci-Fi/Fantasy action films; his favorites were The Hobbit, Lord of The Rings and Star Trek films. But the activity he enjoyed the most - especially in his later years - was going to Disneyland. An annual pass holder and "big kid at heart," he made it a point to visit the theme park with his kids, grandkids and great-grandkids whenever he had the chance. Carlos was diagnosed with prostate cancer in 2002 and underwent surgery and treatments that enabled him to live an additional 11 years with minimal health issues. However, in 2013, his cancer returned and he lost his battle with the disease on April 21, 2015. Carlos leaves behind five children; Connie Huante, Carlos R. Huante, Ed Huante (LeeAnn Huante), Sarah Huante-Bimat (Derek Bimat) and Steve Huante (Leinna Huante), as well as 15 grandchildren, four great-grandchildren, three siblings (Ismael Huante, Jorge Huante and Maria Eugenia Huante-Gonzalez) and many nieces and nephews.