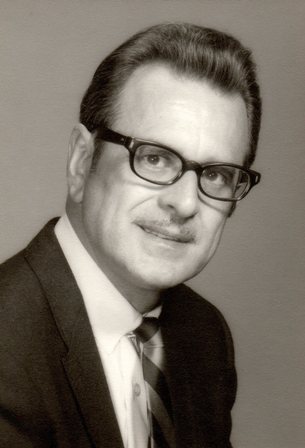 Carl B. Terrano passed away on March 23, 2014 at the age of 92. He was a generous and caring husband, father, grandfather and friend who earned the love and respect of everybody that knew him. The eldest of four children, Carl was born to Salvatore and Maria in Cleveland, Ohio on October 28, 1921. Early in life, Carl followed the example of his hard-working parents who had immigrated to the United States from Sicily. He worked part-time in a grocery store, as a dishwasher and later as a waiter prior to high school graduation. Carl enjoyed singing, playing the trumpet and participating in a band. In high school Carl studied drafting, not realizing how important this field of study would become in his life. He served in the army in the China-Burma-India Theater during World War II. After returning home, Carl and a friend opened Theatrical Arts Studio, offering training towards "positions in radio, stage, screen and television". It was there that Carl met his future wife, a young singer, Louise "Dusty" Schepis. Carl then began his career as a draftsman, and when an opportunity opened up in Los Angeles, he moved his wife and young son and settled in southern California. Carl eventually started his own company, CT Engineering, in 1956, supplying temporary draftsmen and engineers to the defense industry. CT Engineering grew slowly at first, working with small start-up companies, but its reputation for supplying outstanding men and women led to major contracts within the defense industry. The business expanded by supplying clerical personnel and later, information technology professionals. CT Engineering's list of clients, such as Allied Signal, TRW Systems and Hughes Aircraft read like the Who's Who of businesses in Southern California. Carl gave back to his community with his energy and business acumen by serving countless hours in appointed positions on the Manhattan Beach Beautification Commission, the Manhattan Beach Planning Commission, the Boards of the Little League and the Pony League, the South Bay YMCA and the Manhattan Beach Board of Zoning Adjustment. In addition, Carl donated equipment and scholarships to student draftsmen in local schools as well as lending financial support to Police DARE and K-9 programs. After full retirement and the sale of CT Engineering in 2001, Carl enjoyed golfing, playing cards and music. The three things most important to him were his family, his work ethic and his integrity. He was a constant source of inspiration to his children and grandchildren. Carl was preceded in death by his wife Dusty. He is survived by his, son Carl (Debbie), daughter Debi Bliss (Bill), daughter Marie Penza, and grandchildren Amanda (Ryan), Christopher, Ashley, Michael, Tammy, Michael and Carmen. A private graveside service will be held at Holy Cross Cemetery in Culver City on April 17, 2014.