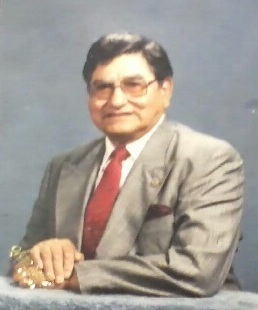 Camilo Leo Lopez, a resident of San Pedro, passed away on Wednesday, February 26th, 2014, in San Pedro. Born in Phoenix, Arizona, Camilo was 86 when he died. He retired in 1988, a member of ILWU Local 13, after 38 years on the waterfront. Raised in Oxnard, CA, he spent time in Oregon and Northern California before moving to San Pedro in 1962. In 1988, after a trying bout with drugs and addiction he gave his life to Jesus Christ and trusted him as his personal Saviour. Camilo moved to Santa Maria with his wife in 1990 and became a member of Fundamental Baptist Church. In 2002 they returned to San Pedro where he served the Lord at Bayview Baptist Church and began his 12-year fight with Alzheimer's disease. After suffering a broken leg, followed by pneumonia, his corner "threw in the towel" and he died within minutes at 4:34am, having lost the physical, but winning the spiritual fight for Eternal Life, through Jesus Christ. He is survived by his loving and devoted wife, Marge Lopez; son, Pablo Lopez; daughter-in-law, Karen Lopez; granddaughters, Shibvouhn and Leah Lopez; great-grandchildren, Zoe Santoro, J. D. Bacenko and Richie Pfeffer; his sisters, Toni Delgado, Sally Marquez and his brother Edward Lopez. A gathering of family and friends will be held at Lighthouse Memorials and Receptions in Gardena on March 8, 2014 from 12 noon until 2:00 pm. The Service will begin in the chapel at 2:00 pm followed by a reception in the Lighthouse Reception Room until 5:00 pm. Burial will be private.