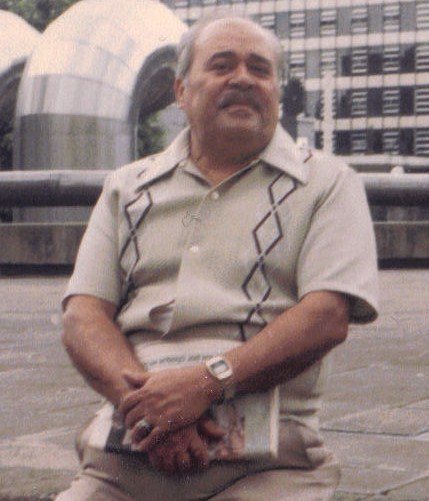 Camilo Morales, 80, passed away peacefully in his sleep on August 16, 2014 in Gardena, California. He was born on March 8, 1934 in La Trinidad, Nicaragua to his parents Camilo Morales and Francisca Alaniz. Camilo Morales grew up in Nicaragua. He became a U.S. naturalized citizen on June 20, 1985. He attended National Technical School in Los Angeles, California where he received certification in Automotive Diagnostics. He worked at Georgia Pacific from 1957-1972, West Coast Plywood from 1972-1981, and later for National Sanitary as a machine mechanic where he worked until retirement. Camilo Morales married Liduvina O'Neill in 1964 in Las Vegas, Nevada. They were married for 44 years. He enjoyed sitting on the front porch talking to all the neighbors, and he enjoyed collecting watches, tools and guns. Camilo is survived by his children Carlos, Delia, Brenda, Eneida, Bernice and Camilo; his siblings Marcelino, Teresa, and Norma; his grandchildren; and his nieces and nephews and other relatives. Camilo Morales was preceded in death by his wife Liduvina Morales and his siblings Consuelo and Graciela. A funeral service will be held at Lighthouse Mortuary, 1016 W. 164th Street, Gardena, California at 10:30 am on August, 29, 2014. Immediately following the service, a reception will be held at Lighthouse Mortuary from 11:30-1:30 pm. The burial will follow the services at Pacific Crest Cemetery at 2701 182nd Street, Redondo Beach, California at 2 pm.