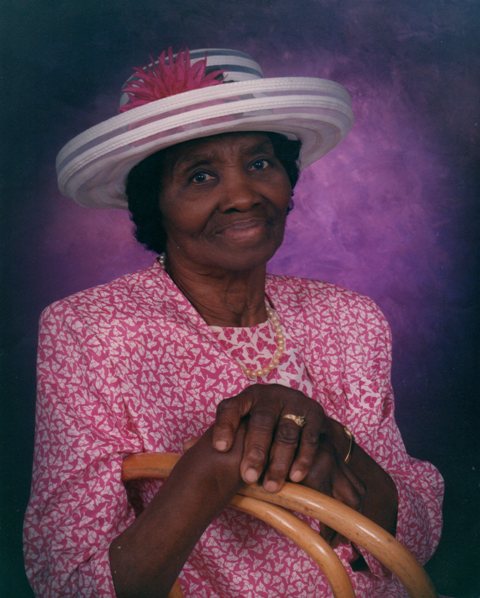 The life of our very own Centurion~ Caldonia Dread On March 27, 1916 in Kildare, Texas, Floyd Davis and Mable Barnes were blessed with a daughter, Caldonia Davis. Caldonia was raised and educated in Kildare, where she attended St John Missionary Baptist Church and attended Perfection High School. During her high school years, Caldonia gave her life to Christ and was baptized as a teenager. In 1939, Caldonia married Jury Jameison. On August 9, 1940, Caldonia gave birth to thier son, Joe Leland Jameison. Caldonia and Jury separated in marriage in the early 1940’s. Caldonia moved to Wala Wala, Washington where she began working as a seamstress for the U.S. Army. She met and married Acie Dread in 1942. They relocated to California later that same year and joined Welcome Baptist Church where she sang in the choir. Caldonia continued as a seamstress until a car accident in 1966 where she suffered a leg injury. Caldonia later became a member of Beulah Baptist Church under Pastor J.O. Barnett, and currently under Robert L. Taylor. She faithfully served as a member and founder of “The Old Hundred”, which is a missionary ministry that would visit various churches to bring God’s story to life through songs. Caldonia was also a member of the Eastern Star, and an honored member of the Mothers Board. Caldonia spent her days doing the work of the Lord, whether it was praying for someone, bringing meals to those who were sick and or shut in, and visiting convalescent homes. Her biggest accolade was the many she introduced to Christ. Most of us know her as Mother, with her grandkids pronouncing her name as “Mutha”. Mother spent her weekdays driving to Rolling Hills in the morning and staying until the evening so that she could help with her five grandkids. Weekends included those same five being dropped off on Friday to attend church on Sunday. When she wasn’t busy with her grandchildren, you could find her serving at her church. She was highly respected in both her church, and her community. Mother was one of the best cooks that has ever blessed this earth. She was absolutely beautiful inside and out and she dressed to the nines. A visit to her home always included a home cooked meal and a trip to her beloved garden so one could see the production of the meal they just consumed. Guests always left with more than they came with, whether it be food, clothes, a special gift she purchased, or money. One never left her presence without feeling love, hope, support and encouragement as she prayed with many before they walked out her door. Our fondest memories of the holidays included a frosted Christmas tree, a holiday meal that included up to twenty of her personal recipes, home-made cakes and pies that garnished her dining room mantle, nuts to be shelled, fruit and candy baskets for the grandkids and of course the famous “Fruit Cake”. She is known for her made from scratch buttermilk biscuits, chicken and dumplings, greens (all varieties), meatloaf, dressing, fried chicken, lemon-jello cake, banana pudding, homemade ice cream, peach cobbler and her famous “Hot Water Corn Bread”. On September 17, 2018 God called Caldonia Dread home. Preceding her in death was her husband Acie Dread; mother Mable Barnes; father Floyd Davis and brothers James Edward Davis, Jimmy Lee Green, Otho Patton Sr., and Melvin Davis; sister Essel Davis-Bell and Flozel Davis-Williams; one son Joe L. Jameison and daughter-in law Beverly Jameison. Caldonia leaves to cherish her memories one sister Jessica D. Butler-Grant; five grandchildren Leland (Bianca), Kaddia (fiancé Jon), Kenric (Melinda), Krista (Ben), and Leigha (Damon); seven great-grandchildren Kyley, Haley, Kolby, Kennedy, Tori, Kenric II and Benjamin; a host of nieces; nephews; cousins and friends.