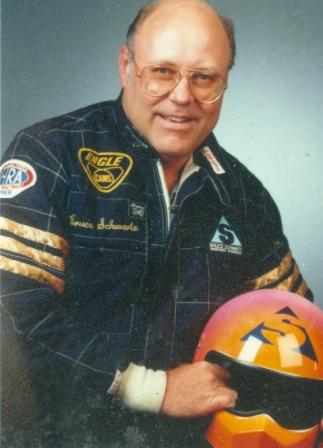 Our Dear Friend Bruce Schwartz passed away at home just seven weeks after he was diagnosed with brain cancer. Born in Los Angeles to Melburn and Dorothy Schwartz, Bruce graduated from Dorsey High and joined the Navy. After the Navy, he attended El Camino College, University of the Redlands and later UCLA, where he earned his MBA. He became a police officer for the Hawthorne Police Department and retired in 1985. Bruce's second career was as an investment advisor. He pursued many interests and hobbies, particularly his lifelong passion for cars by racing dragsters. Bruce was active in the National Hot Rod Association, where he was an announcer at racing events. Bruce enjoyed his time-share three times a year in Palm Springs and spent many vacations on the Parker Strip of the Colorado River. He belonged to the Kiwanis Club and served as an arbitration judge. Bruce also had a strong passion for music; he became active in the choir of the Church of Jesus Christ of Latter-Day-Saints in his local congregation and was auditioning for the Southern California Mormon Choir when he began his battle with cancer. Bruce is survived by a legion of friends from many facets of his life and will be missed by all who loved him. A memorial service will be held Thursday, Jan 5, 2012 at 11:00 a.m. at the LDS Chapel at 22605 Kent Avenue, Torrance 90505, followed by the Interment at the Inglewood Park Cemetery. Visitation will be at the Chapel before the service at 10:00 a.m. A reception where we can share our memories of Bruce will begin at 3:00 p.m.