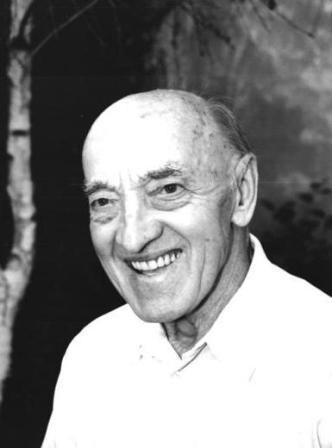 Bogdan "Bogey" Kovacic was born in Slovenia, part of the former Yugoslavia, on October 27, 1929 under what must have been blue skies. While in Austria on March 8, 1956 he married the love of his life, Louise Lunder and stayed married to her until his passing on April 4, 2014, 58 years later. Bogey is survived by a large and loving family, including his wife Louise; his two beautiful daughters Anita and Sonja; the grandchildren he loved dearly, Patrick, Andrew, Matthew, Sarah, and Gregory; and his sister Marta. Bogey was a bricklayer and general contractor, building homes and apartments throughout the South Bay. He loved golfing, skiing, and his dog Sparky, with whom you would often see him, walking around Manhattan Beach. Services will be held at American Martyrs in Manhattan Beach. Rosary: Wednesday, April 9th at 7:30pm, and Funeral Mass: Thursday April 10th at 10am. In lieu of flowers, donations to the Alzheimer's Association are appreciated!