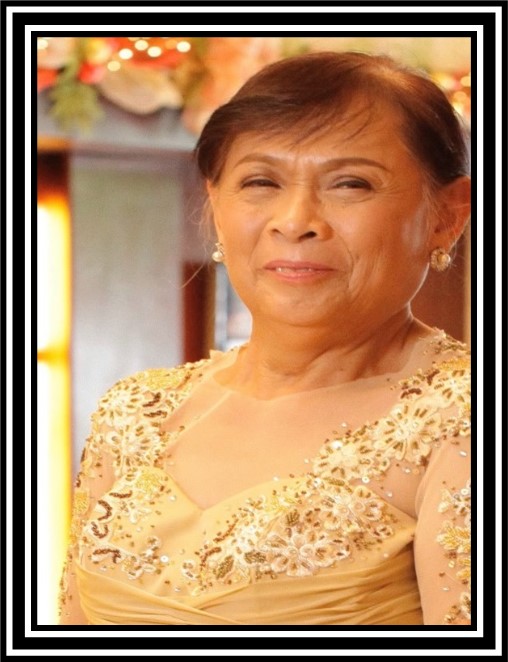 Blanca Yujuico received her wings and went to walk with the angels on June 26, 2021. She was 75 years old. A lifelong Pampanga and California resident, Blanca was well-loved in both her hometowns. Blanca was survived by her husband, Ernesto; her children, Mini Pearl, Patrick, Joel, and Peter; her grandchildren, Juliana, Jillian, Zachary, and Johann; and her sister, Lumen Sandiongco.

Blanca was born on March 2, 1946 to Lamberto Sanchez and Eufracia Lazatin in San Fernando, Pampanga, Philippines. She was the youngest of six children. On December 19, 1971 she married the love of her life, Ernesto. She fondly called him “Tung.” For many years, both Blanca and Tung looked forward to celebrating what would have been their 50th wedding anniversary in 2021.

Blanca lived a life caught up in the Catholic faith. Early on, she learned to love reading the bible and Catholic teachings.  She used to say that if she had not married, she would have been a religious nun. She went to Mass whenever she could. One of the great joys of her life was going to mass with her family and receiving the Holy Communion together.  Her whole-being centered on helping others.  She dedicated a great deal of her time, resources and energy serving the Church and its flock as an usher, catechist, active member of different religious organizations, sponsoring masses and providing meals to the other church volunteers, including priests.  Spending countless hours adoring the Blessed Sacrament, Blanca prayed for all her family, relatives, friends, the intentions of the Holy Father, the sanctity of life and marriage, and the return of everyone to God.  In her benevolence, she supported two persons’ educational endeavors – one of whom completed a bachelor’s degree in education.  She put everyone’s well-being before her own.

A devoted grandmother to her four grandchildren, Blanca retired earlier than expected, just so she could babysit them. Never did she miss first birthdays, baptisms, graduations, holidays, and all major occasions. Her day is not complete until she calls her grandchildren – FaceTime or otherwise – to say, “I love you and goodnight” or “I love you so, so, so much.” Blanca was lovingly known to her grandchildren as “Ola.”

Aside from her passion for reading religious books, Blanca loved to cook.  She successfully turned this passion into a blooming catering business in the Philippines.  She was famous for her chicken ala king, baked macaroni spaghetti and beef ala pobre.  Blanca also loved to travel.  Together with Tung, she completed a pilgrimage to the Holy Land, Lourdes, Fatima, and Spain.  In addition, she has been to Japan, Canada, different parts of Italy and France, Singapore, Washington, Michigan, Illinois, New York, Washington D.C., Virginia and several provinces in the Philippines.

In 1969, Blanca earned her Bachelor Degree in Education from the Philippine Normal College.  For most part of her 30 year-teaching career, she taught Home Economics at San Fernando Elementary School. In 1995, Blanca permanently migrated to the United States. She briefly worked at ABC Unified School District before providing care for older adults alongside her sister, Redempta “Dem” Bucad.  She provided excellent care to her patients, giving them the dignity and personal care they deserved.  In return, Blanca became long-time friends with her patients’ families.  After a few years, Blanca decided to venture into retail. She became a sales representative for Ross Stores. Everyday, Blanca was praised by her customers due to her endearing traits. They loved her smiles, thoughtfulness, generosity in compliments, and friendliness.

Blanca was a faithful woman who loved the Lord, her family, friends, and community. A saintly person, she aspired to be a blessing to everyone, helping as many as she can with her humble offerings of sacrifices, love and generosity.  She will be tremendously missed!