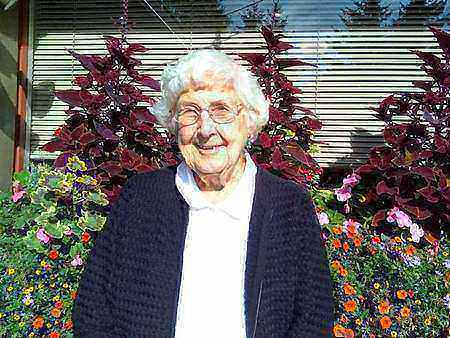 Beverly Jean (née Winzler) Peterson passed away on her 89th birthday, September 22nd, 2012. Beverly was born in Eureka, California to George and Ruby Winzler. Much of her early childhood was spent on the family dairy ranch in Fernbridge. She loved telling stories about playing in haylofts and riding in horse-drawn wagons with her beloved brother and best friend, George S. "Bub" Winzler, Jr. Bub's tragic death in a military airplane crash on Christmas Eve 1942 saddened Beverly to the end of her days. Beverly attended college at UC Berkeley, where she received a Master's Degree in Latin American History. She was a life-long though often disappointed Cal football fan. While at Cal she met the love of her life, John Wright "Pete" Peterson, on a blind date. They fell in love, were married and had five children together. Susan, the oldest, Jack and Rick were born in Berkeley. Then Pete, who had received a PhD in Physics from Cal, took a job with Bell Laboratories, and the family moved to Morristown, New Jersey, where Beverly developed a lifelong aversion to east coast weather. After her daughter Pat was born, the family came to its senses and moved back to California. Pete took a job as Director of Research and Development with Pacific Semiconductors Incorporated, whose parent company was TRW. Beverly and Pete moved to Torrance, where their son Rob was born, and never moved again. Many of Beverly's lifelong friends were neighbors in Berkeley, Morristown and Torrance with children of similar ages to her own. In 1965, the great tragedy of Beverly's life occurred: Pete, her lifelong love, died of a heart attack. Beverly was left with five children to provide for. She began an 18 year teaching career, on top of her responsibilities as a single mother. She taught at several schools, but enjoyed most her years "home teaching" students of Rolling Hills High who were shut in by illness or injury. She was especially touched by one of her students, Chris McGivers, who died of leukemia while studying with Beverly. She often spoke of him fondly, even after she retired, and became friends with Chris' mother Pat. Beverly was a gifted and influential teacher. In 1975 Beverly was diagnosed with breast cancer. Her two years of treatment left her weak and sick much of the time, but she persevered and eventually made a complete recovery. After retiring as a schoolteacher, Beverly focused her attention on her grandchildren. She became a fixture at Little League and basketball games, and often visited her daughter Susan and her children in the Bay Area. Beverly's refrigerator is still covered with pictures of grandchildren and great-grandchildren, along with the children of others whose lives she has touched over the years. She was loved and revered by all, from the Little League managers who coached her grandchildren to Dr. Hammer and Dr. Kissel, the physicians who kept her going and helped her to make it to games, high school plays, band concerts, graduations and other events year after year. Beverly is finally reunited with her mother and father, her brother Bub and her beloved husband Pete. She is survived by her brother John, her sister Lura, her five children, Susan, Jack, Rick, Pat and Rob, her ten grandchildren, Brid, Sean, Matthew, Michael, Niamh, David, Christopher, Ronan, Jenele and Scott, and her two great-grandchildren, Darcy and Tristan. Her family loves and misses her, and would like to invite you to a celebration of her life at The Neighborhood Church in Palos Verdes on Friday, September 28th at 1:00 PM. In lieu of flowers, the family requests that you make a donation to the Winzler Children's Center in Eureka, California: http://www.eurekacityschools.org/index.php?option=com_content&view=article&id=6&Itemid=51 or the UC Berkeley Alumni Association: http://givetocal.berkeley.edu/.