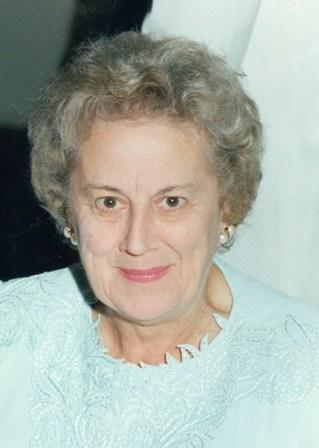 Betty June Ball was born 7 June 1922 on Fort Collins, CO, the youngest of May and George Ball's six children. Her father died when she was nine months old and then the 1929 Crash decimated their resources, so in 1938 the family moved to California. Betty graduated from San Fernando High School and then went to business college. She began as a bank teller, and then moved to General Petroleum Oil Company (now Exxon-Mobil) where she was the second woman allowed to work inside the refinery gates, initially as a timekeeper and eventually as payroll supervisor. Recognizing her warmth, competence, and beauty, the refinery workers voted her as their representative to a high-profile promotional tour of the west coast refineries. She married her fellow employee, John Donley, 17 June 1951. Together they raised three children. Betty was an enthusiastic and devoted mother and homemaker, active in PTA and church. When her children were all in school, she began work as a part-time bookkeeper, and in her sixties, she returned to work full time at Mobil. In 2006 she was widowed, but she continued to live independently in her home, physically frailer but completely alert and engaged. She enjoyed travel and crossword puzzles and popular music; loved to sing and laugh, was a loyal and thoughtful friend, a deacon of First Christian Church, and always supremely rejoicing in her family-beloved; loving and lovable. Early on 15 October, she died in the hospital of heart complications. She is survived by a daughter, Janet; a daughter, Lisa, and her family; a son, Patrick and his family; and many much loved nieces and nephews. A gathering of family and friends will be held at Rice Mortuary on Sunday October 21, 2012 from 5:00 pm until 8:00 pm. The graveside service will be held at Green Hills Memorial Park on Monday October 22, 2012 at 11:00 am.