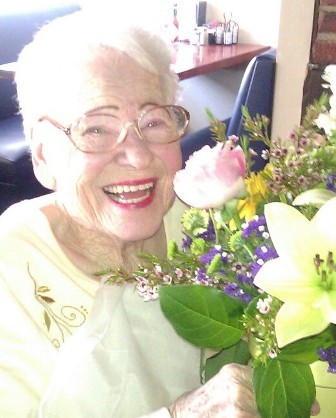 Betty Jayne Mayhew aka "Betty Boop." The nickname her best friend, June Weeks gave her in 1956. She loved her nickname. June loved her and she loved June. Born to mother Edna Davisson and father Dr. James Raymond Bohannon on June 19, 1923 in Blackwell, OK. Passed on October 5, 2016 in Torrance, CA. Daughter, sister, mother, aunt, grandmother, great grandmother, great-great grandmother and friend to many…She is survived by her son James William Peppers and daughters Saundra Louise Cooper and Sherry Marie Wingo. Also: grandsons Michael Allen Blomsterberg, David Wayne Blomsterberg, Stephen Keith Cooper, John Earl Wingo and granddaughters Christina Marie Wingo, Joanna Paola Peppers, and Melinda Lee Cooper, 11 great grandchildren and 3 great-great grandchildren. In her younger days she enjoyed working at Douglas Aircraft as a parts planner. She went on to work at North American Aircraft where she made a ton of friends. She would always come home laughing after her "car pooling" with the people she worked with there. Later she gained employment with Aerospace, where her office was decorated with many of her favorite plants (she had such an amazing "green thumb"). She made so many friends there, everyone loved her, and she enjoyed her job immensely. She was involved in several clubs throughout the years, and loved playing games, especially pinochle. It didn't matter what time of the day it was, she was always ready to go, full make-up every day. She literally loved the casinos and the slot machines. Even though in recent years, the slots only took paper money, she'd still always have her quarters with her when she went :)