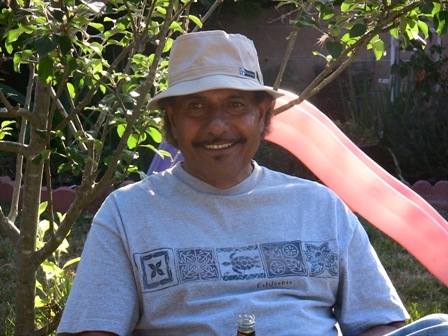 In Loving Memory Bernard "Pele" Pereira 8/29/44-6/18/14 Born and raised on the island of Tutuila in American Samoa, Bernard "Pele" Pereira passed away at his home in Carson, California on June 18, 2014. He was 69 years old. Pele was the third child of seven, and eldest son of Edmund and Senia Pereira. Raised in the village of Leone, Pele grew up assisting his father in building their family home, learning at a very early age valuable skills and good work ethic. He attended Marist Brothers School and graduated from the High School of American Samoa (Samoana) in 1965. He soon left his island home for California, on an Engineering/Electronics scholarship. He found employment at Klinger Co. (which would later become Dietzgen) in Gardena working as a machine operator, thriving on his work, instilling the work ethic his father had taught him as a young man. It was here that he also met the love of his life, Donna Olivares, in 1969, and after a courtship of nearly two years, they were married. The 70s welcomed the arrival of two sons; Pele Jr. and Vince. Pele was proud of his sons and enjoyed the thrills of being a father. He was hard-working and dedicated to providing for his family, never late to work and never missing a single day of work in his more than thirty years of employment. Pele and Donna made Lomita, California their home and spent much of their free time with their family as well as friends. Together they enjoyed camping trips, family barbecues, birthday parties and just hanging out. In 1980, Pele and Donna were blessed with their daughter Senia. And in the same year, Pele purchased his famous green '74 Dodge van, which would soon become the mode of transport for many memorable camping trips with his nieces and nephews to Yosemite, Lake Piru and La Jolla to name a few. The rule of thumb was "if you can fit in the van, you can go." Needless to say, it fit quite a few of the kids and they were able to join in on the fun. In 1989, they moved to their present home of Carson, California. This love for travel continued even after the kids grew up, and as often as possible, he and Donna would jump in the car and travel as close as quick trips to Santa Barbara and San Diego or hop on a plane and travel as far as Mexico or Maui. They also frequented local parks, beaches and malls; it didn't matter, as long as they were together. In speaking to others about their travel, Pele would say "We're the Discovery Channel", always discovering new adventures. Pele eventually retired, and was blessed with 11 grandchildren, whom he loved and adored, and loved spending time with. He was very proud of all of them, rewarding them with money for good report cards, and spoiling them with trips to grab a bite at a fast food restaurant. He enjoyed watching sports, those of his grandchildren and especially his beloved Lakers. He will be remembered for many things, including his talent of being able to fix or build just about anything, which quickly earned him the title of the "Samoan MacGyver". He loved his gardening, especially his backyard, or "Little Samoa" which was a source of pride and joy for him. He will also be remembered for his deep love for his wife Donna, his children and grandchildren, as well as a genuine love for all of his family and his friends; always making them feel welcome and loved. He also loved the Lord, and loved attending church with Donna faithfully. He particularly loved listening to the Samoan Choir sing at St. Philomena. Pele was a man of few words, very humble, responsible, loving, kind, generous, frugal, talented and genuine just to name a few qualities. He was a wonderful husband, father and grandfather, and a favorite uncle for many nieces and nephews. A beloved brother, cousin, son, and friend…he was loved by many. Pele is survived by his adoring wife Donna; daughters Mary Garza (Armando), Senia Pereira; sons Pele Jr. (Trisha) and Vince; sisters, Tina Siaumau and Lorna Pereira; brothers Joe and Edmund; and 11 grandchildren: Malia Pereira, Pele Pereira, Armando Garza Jr, Elizabeth Garza, Cynthia Garza, Eliseonna "Elly" Pereira, Everett Pereira, Jade Pereira, Khalel Cox, Keiden Cox and Kordell Cox. Family service and viewing will be held on Monday, July 7th at 5:30 at Calvary Chapel South Bay in Gardena. Mass will take place on Tuesday, July 8th beginning at 10am at St. Philomena Catholic Church in Carson, followed by burial at Pacific Crest Cemetery in Redondo, California.