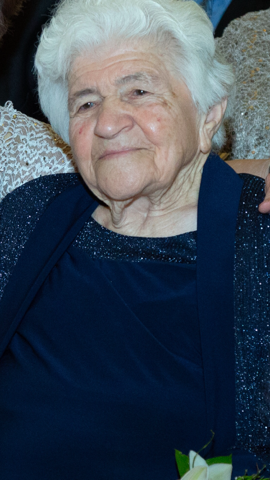 Azniv Helvadjian was born in Mardin, Turkey.  Prior to her birth her father passed away, and at age five she lost her mother.  Her older sister was already married, and her aunt stepped in to help raise her. Azniv took on the role of Mother, Sister, and friend to her five brothers.  She was always hardworking, eager to learn, and help others.  Her neighbors referred to her as Azniv Kouyrig because she was a sister to all.

Azniv grew a relationship with the Helvadjian family and Antranig Helvadjian who owned a grocery store, fell in love with her kind heart and asked for her hand in marriage. Upon getting married Azniv formed a close relationship with her mother in law, whom she adored, and her four sister in laws. The couple were blessed with three children, Boghos, Berjouhi, and Nevart.

When unrest began in Syria, the couple along with their children and their families moved to the United States. There they began working hard with hopes of obtaining the American Dream. The couple were blessed with five grandchildren Harout, Shant, Zarmenee, Taline, and Marina. Watching their grandchildren grow attend college and become successful brought them joy.

Azniv lost her husband in 2007 and her son Boghos in 2009.  These devastating losses weighed heavy on Azniv but she continued to spread kindness and rely her faith. Azniv was able to meet seven great-grandchildren who were the light of her life and her memory will live on through them.