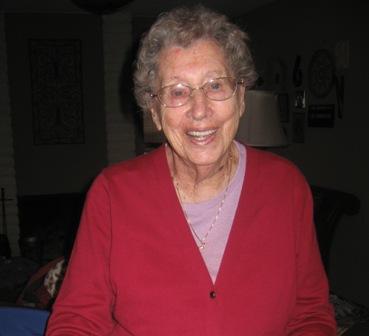 Avril Norma Sandness April 5, 1921 – June 23, 2012 Avril Norma Sandness, 91, of San Pedro, passed away in her home after a brief illness, with loved ones at her side, on June 23, 2012. She had lived independently in her home of 50 years with her beloved dog, Zoe, until suffering a stroke five weeks earlier. Norma was born April 5, 1921, in Scarborough, England, to Walter and Margaret Stewart. She witnessed or participated in many of the defining events of her generation. Having lived through the Great Depression as a child, she was forced to take shelter many times as a teenager during the early years of World War II when Scarborough would be bombed by German warplanes. When she became old enough, Norma joined the Auxiliary Territorial Service (ATS), the women's branch of the British army at the time. She served throughout Great Britain as a telephonist and radar plotter. She was also trained as a backup ack-ack (anti-aircraft) gunner. In 1942, Norma met her future husband, Jorund Sandness, a sergeant in the United States Army who had been training in Ireland for the coming invasion of North Africa. They corresponded throughout the remainder of the war and were married in 1945. A few months later Norma sailed to the United States, aboard a former troop ship, as a war bride. Norma and Jorund began raising their family in Minneapolis, Minn., and moved to San Pedro in 1961. Norma's primary focus in life was her family. She kept her children safe and out of trouble and raised them well. She taught Sunday school, helped with a variety of school and church activities, and was a Cub Scout leader. She was a loving mother and grandmother. Norma and Jorund were married for 61 years, until Jorund's death in 2007. Although she became a United States citizen, Norma never abandoned her British outlook and love for England. She never lost her British accent. She and Jorund returned to Scarborough many times over the years to visit her family there. Norma collected Toby jugs and porcelain replicas of English country cottages. She enjoyed British mystery novels. Norma learned to knit as a child and developed that skill throughout her life. She took home many ribbons and other awards over the years, for sweaters and other items entered in competition at the Los Angeles County Fair. Other hobbies included cross-stitch and needlepoint. Her children and grandchildren have many treasured keepsakes made by her hands. Survivors include a daughter, Peggy (David) Cobb of Lynnwood, Wash., sons Paul (Ruth) Sandness of Huntington Beach and John (Judy) Sandness of Loveland, Colo., grandchildren Amber, Jeanette, Kevin and April, and great-grandchildren Leah and Casey. Norma was preceded in death by her husband, her parents, and a brother, John Stewart. A memorial service will take place Friday, July 6, 2:00 p.m., at Rice Mortuary, 5310 Torrance Blvd., Torrance.