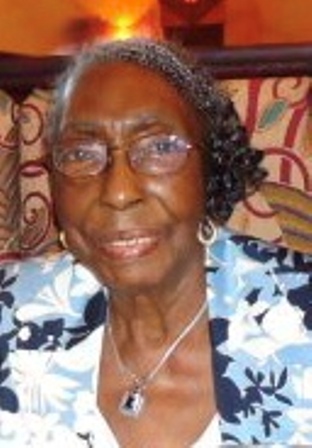 On August 27, 1925, Audrey Lee Napoleon Hurston was born to Jerome “Joe” and Alma Napoleon in Campti, LA at Natchitoches Parish. She was the third of seven children born to this union. At an early age, the family worshipped at St. Peter’s Baptist Church, where she accepted Christ as her personal Lord and Savior. She received her early childhood education from St. Peter’s Baptist Church and Natchitoches Parish School. After graduating from high school, Audrey moved to Los Angeles, CA where she was welcomed by her two Aunts. Soon after moving she started her first job as a cook at a sanitarium on Olympic Boulevard. In 1946, a friend from her hometown introduced her to the love of her life, Osburn “Jack” Hurston. They were married on November 3, 1948 and blessed with six children, one of whom Marvin, passed away at childbirth. Audrey’s Christian experience continued on at Ascension Catholic School from the time her oldest was in first grade to her last. Audrey stayed busy as an active and loving mother to her children and their friends. She was a Boy Scout Den mother, Girl Scout Mom, chauffeur, and with her husband Jack, a disciplinarian to her children. Her southern roots made her a lifelong excellent cook. She would sometimes make dinner to be served at Mission Church, a ministry at Zoe Christian Fellowship. Audrey loved getting her hair done, was never at a loss for words, and loved watching court and game shows later in her life. When she wasn’t devoting her time to her family or cooking, Audrey worked at Sears & Roebuck until she retired from there after 25 years. She retired a second time after working at Los Angeles City College. On March 31, 2018, Audrey Lee peacefully made the transition to be with her Lord and Savior while in the comfort of her home. Audrey was a God-fearing woman, loving wife, mother, daughter, sister, aunt, and friend. She devoted her life to her husband, Jack, who proceeded her in death, and her siblings--Helen, Murciel, Joe, Mable, and Robert. She is survived by her five children - Osborn (Dea Hurston), Donald (Denise Hurston), Helen Hurston, Gloria Hurston-Davidson, and Lisa Hurston, her brother Felton H. Napoleon, six grandchildren--Donald Jr, Jessica, John (Shanta Hurston), Shanise Hurston who proceeded her in death, Taylor and Kyle Davidson, three great-grandchildren -- Don Orrah, Xavier, and Cruz Hurston, one great nephew Ricky Jones, and a host of friends.