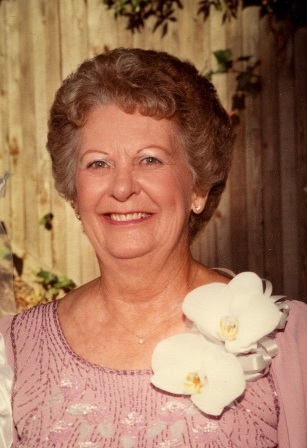 Arlene Marie Kaelin, long-time resident of Rancho Palos Verdes, passed away at age 86 at the Huntington Retirement Residence in Torrance. She'd been in hospice care for lung cancer. She was born November 16, 1925 in Arkansas City, Kansas, to Francis and Linnie McCammon. She graduated high school in 1943, and married Louis Kaelin in August of that year. He was a lieutenant (navigator) in the Army Air Force. They met on a train when Arlene was 14. Most of their courtship was by mail. When WWII ended, they moved to Los Angeles, eventually settling in Burbank. In 1957 they moved to Rancho Palos Verdes, where they lived until 2006, when they moved to the Huntington Retirement Residence. Arlene and Louis were founding members of St. John Fisher Parish in Rancho PV. She was an active volunteer for many years in the Altar Society, parish school, and religious education program. Arlene was also an avid golfer, and a founding member of Los Verdes Women's Golf Club. She held several leadership positions in the club over her many years of active membership. Besides golf, she loved cigarettes, bourbon, poker, Sequoia National Park, Yellowstone, and the Grand Tetons. She was preceded in death by her husband, two sisters (Erma Gene Keeley of Cody, WY and Leah Converse of Wichita, KS), and her great-granddaughter (Suzanne Marie Bollinger of Olathe, CO). Arlene is survived by her daughters, Karen Bollinger (Montrose, CO) and Candy Deemer (Manhattan Beach, CA), seven grandchildren (Jim, David and Doug Bollinger and Jill Nowak; Kevin, Andy and Brian Deemer), five great-grandchildren, and her niece, Lynn Ann Mitchell (Cheyenne, WY).Funeral services will be at 12:00 p.m. Saturday, November 3, at White and Day Mortuary, 901 Torrance Blvd., Torrance, CA. Internment will follow at 2:30 at Green Hills Memorial Park in San Pedro. Donations in her name can be made to the Girl Scouts of Greater Los Angeles, 801 South Grand Avenue, Los Angeles, CA 90017 (www.girlscoutsla.org).