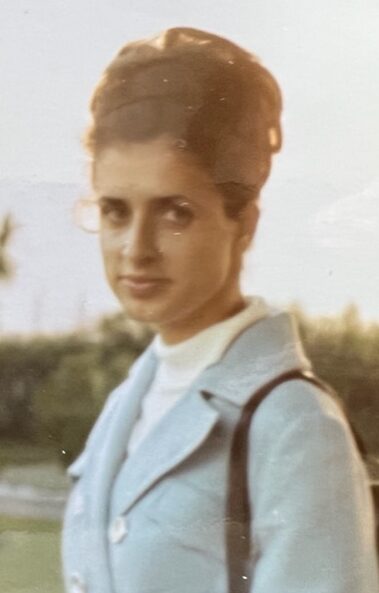 Argyro Yiakas was born Argyro NIckolaou Katsaros on November 25, 1939, in Ikaria, Greece to Nicholas Katasaros and Angeliki Katsaros (Glaros).  She was the third of four children. Her two older sisters Despina and Georgia, were over 10 years older than her. Her younger brother, Themistocles, and her, just one year apart in age, were both born during the height of WWII, when the island of Ikaria was occupied by German and Italian forces.  In just her first few years of life, Argyro suffered the fate of many Greeks during that time, and experienced great hunger and deprivation.

Through toughness and faith, her family managed to survive the devastation of war, and contacts with family in the United States soon changed the course of her life.  Her first cousin, Tom Katsaros , visited Ikaria after the war and charmed his Ikarian relatives with stories of the prosperity and opportunity awaiting in America. He invited his younger cousin Argyro to come to San Gabriel, CA and live together with him and his parents so she could go to college in the USA.  Hoping for a better life for their young daughter, Argyro’s parents made the hard decision to allow her to move to California and live at the home of Tom’s parents, Manolis  and Lemonia Katsaros. Manolis, better known as her Theo “Mike” was one of the proprietors of the famous Gus’s BBQ in South Pasadena and was very excited to bring his niece to California to go to college.  So, after completing high school, she moved into the home of her Theo Mike and Thea Lemonia, and they enrolled her at Pasadena City College, where she excelled and completed her studies with honors. Theo Mike and Thea Lemonia became Argyro’s surrogate parents in America, and she was the daughter they never had. Their love for each other was lifelong, and Argyro always considered herself blessed to have had two sets of parents.  No matter how much she loved moving to America though, she never forgot the family she left behind and the plight of the poor back in Greece. She religiously sent packages of clothing and necessities back to her native country and believed that she had a sacred duty to share what she had with those less fortunate.

It didn’t take long in San Gabriel before Argyro caught the eye of her cousin Tom’s best friend, another fellow Ikarian, Costa Yiakas. Over a macaronadtha dinner made by Thea Lemonia, Costa became smitten with Argyro. He quickly decided she was the one for him and they were married on June 19, 1960 at St. Anthony’s. Since that day, they remained together for 62 years.

Argyro and Costa were among the founding members of St. Anthony’s Greek Orthodox Church in Pasadena, a hotbed of the Ikarian population in Southern California in the 1960s. Prior to having children, they had many adventures exploring California with her cousins Peter and Despina Katsaros, sailing their boat, the Harlequin, and driving cross country in their two seater convertible Triumph TR-3. Life was so good in America, her brother Themistocles soon joined her in California, and the two siblings would remain in the United States for the rest of their lives.

Even though most of their friends and family resided in the San Gabriel Valley, Argyro and Costa missed the sight of the ocean, as true islanders do, and in 1972 moved to Redondo Beach to be closer to it. Once there, they welcomed the birth of their two sons, Demosthenes in 1973 and Nicholas in 1977. Argyro’s greatest skill and passion was motherhood, and she absolutely relished it.  In her view, there was nothing more vital in a child’s life than a devoted mother, and she lived that belief every day.  It was such a huge part of her very being that she wouldn’t just mother her sons, she also found herself naturally mothering all their friends too! She truly felt they all needed her love, and she wanted the best for each of them.  Argyro became a fixture at St. Katherine’s Greek Orthodox Church in Redondo Beach, becoming a lifelong member of the Daughters of Penelope, Philoptohos, and one of the founding members of the youth Greek Dance program there. She remained a proud member of the Pan Icarian Brotherhood for her entire life, and never missed an Ikariotiko Convention. Dancing until 6:00 or 7:00am was not only welcomed at these Conventions but expected. She loved Greek dancing and considered it the greatest way to share joy with loved ones and strangers alike. Apart from her many activities at St Katherine’s, she also taught Greek dance, language, and cooking at Torrance Adult school for the better part of 25 years.  It was not uncommon for former students of hers to approach her with hugs, thanking her for teaching them how to “enjoy life”.

As she raised her family,  Argyro brought up her sons to rely on the twin foundations of God and family.  She believed that through God and family, everything good was possible.  As a mother she enjoyed nothing more than watching her sons grow, serve as Church Altar boys, play sports, advance their education and of course Greek dance. She took many trips to share her sons with her family in Greece, and in her golden years travelled the entire globe with her husband Costa. From Europe to Asia, South America to Australia, they saw it all and she loved it. She also became an incredible painter after the age of 60, learning that she had a great artistic talent within her that had been dormant until then.  However, none of her adventures or talents compared to the love she had for family, and the joy she had at being blessed with five grandchildren. She may have enjoyed watching her grandkids play sports and dance even more than she did watching her own sons.

On July 15, 2022 , Argyro passed away at her home in the presence of her husband, after a long and difficult illness at the age of 83. She was preceded in death by her parents, and all of her siblings. She is survived by her loving husband Costa, her devoted sons Nicholas and Demosthenes, their wives Efrosini and Jenny, her beloved grandchildren: Costaki, Maria, Arianna, Zoe, and Sophia, and her five nieces: Mary, Kiki, Angela, Areti and Niki.

Argryo was the consummate mother and wife, and the best friend you could ever ask for. If anyone had the ability to make you feel good about yourself, it was her. She specialized in encouragement; if you didn’t think you could so something, she would make you believe you could. She was also a great lover of life and believed that the joyful expression of dance could heal the spirit.  Don’t be sad for the passing of Argyro because she wouldn’t want you to. She would demand you to enjoy life to its fullest, and when you hear great music, especially that magical island violi, GET UP AND DANCE.

Please join the family in celebrating Argyro’s life and the passage of her soul at the Trisagion and Funeral Services which will both take place at St. Katherine Greek Orthodox Church, located at: 722 Knob Hill Avenue, Redondo Beach, CA 90277.

– Funeral Service: August 2, 2022 at 10:30am with Makaria lunch directly to follow in the Church Hall. Interment to follow Makaria meal at Green Hills Memorial Park in Rancho Palos Verdes, CA, between 2:30pm and 3:00pm.