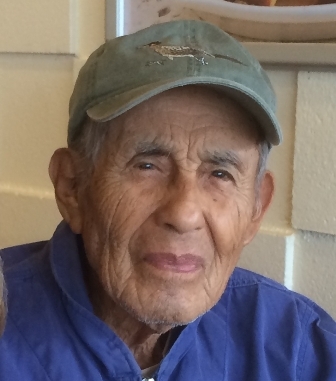 Antonio (Tony) Esteban Sandate September 2, 1918 - January 17, 2015 Tony was born in 1918 in San Luis Potosi, Mexico and migrated to the United States with his mother and siblings in 1920. He served in the Army Radio Corp during World War II in the Pacific and earned his U.S citizenship. After he completed his service, Tony met and married his beautiful, loving wife Matilde. They were married for 34 years until she passed away in 1986. They lived in Los Angeles and Torrance, where they raised their five children. Tony worked to support his family as an Electronic Technician. He was a humble man with a great strength of character and an adventurous spirit. He had a thirst for knowledge, a passion for travel, astronomy and culture. He was also a keen gardener and inventive handyman. He inspired family and friends as he actively continued his hobbies and interests well into his nineties. Tony's greatest devotion and love was for his family, both close and extended. He quietly cared for them all, as this was a calling he treasured. He lived a long full life and was loved by all. Tony is survived by his youngest sister, five children, seven grandchildren and seven great grandchildren. Tony passed peacefully into the graces of God on 17 January 2015 and left us enriched with cherished memories. He will be greatly missed.