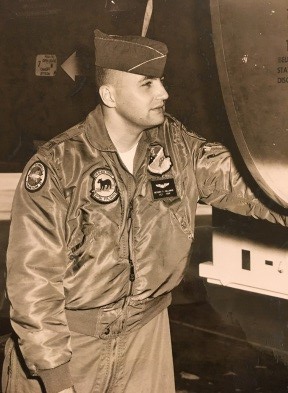 Lieutenant Colonel Anthony Powell Callanan, USAF (Ret.) Anthony Powell Callanan passed away on February 19, 2018, in Torrance, CA, at the age of 77. He was surrounded by loved ones including his “Luv,” Gin. Anthony is survived by his loving wife, Virginia (Gin); brother-in-law Morris Dagerath; nephew Morris Dagerath Jr.; niece Lacy Dagerath; and nephew Michael Dagerath and his wife Jennie Dagerath as well as his four great-nephews, Jonathan, Jeremy, Jeffrey and Josiah Dagerath, who will all miss their Uncle Tony . He is also survived by multiple cousins located in the Philadelphia area who shared in his early days of childhood. Tony Callanan of Torrance, CA, son of the late Andrew and Christine Callanan, was born October 21, 1940, in Philadelphia, PA. The family later moved to Burlington, Iowa. Anthony Callanan graduated from Iowa State University in 1963 with a BS in Aerospace Engineering and was commissioned as 2nd Lieutenant in the United States Air Force. Tony earned his pilot wings in 1965 at Webb AFB, Big Spring, TX. He also first met Virginia Beth Dagerath during this time in West Texas when she was teaching in Midland, TX. They were reacquainted in 1967 at Clark AFB in the Philippines where they married in January 1967. Lt Col Callanan served in a variety of tactical fighter assignments including tours at Davis-Monthan AFB, AZ; Eglin AFB, FL; Da Nang AB, South Viet Nam; Spangdahlem AB, Germany; Hahn AB, Germany; Luke AFB, AZ; Clark AB, Philippines; and Kunsan AB, South Korea. While stationed at Da Nang AB, he flew 100 missions over North Vietnam as an F4 pilot. He would always remind us that we were winning when he left! Tony then served in multiple staff roles at Langley AFB before receiving his final transfer to Los Angeles AFB to work in the Space & Missile Systems Center (SMC) at the Los Angeles AFB. He worked for overt and covert space systems. He carried the first military man portable Global Positioning System (GPS) into field operations. At the time it weighed 17 pounds and was revolutionary technology to aid our troops in combat. Anthony Callanan retired from the Air Force in 1989 after 25 years of service to his country. He retired having earned the Silver Star, the Distinguished Flying Cross, and the Air Force Longevity Service Award with 5 clusters. Tony then started his second career as he continued to work with GPS technology development at the GPA Joint Program Office at Los Angeles AFB. Tony was the technical team manager for the first military handheld GPS receiver - the Precision Lightweight GPS Receiver, (PLGR) aka the “Plugger.” Over 250,000 PLGRs were manufactured for US military services, government agencies and many allied military services. The PLGR revolutionized air-land battlefield operations. Tony was also the author of the first Army/NIMA computer based GPS Tutorial for military land, sea and air operations. Tony continued his work and contributions to GPS technology, now the second generation of GPS called the “Dagger” or the Defense Advanced GPS Receiver (DAGR). This effort culminated in the manufacturing of over 400,000 units that were used across multiple US military services, government agencies and many allied military services. Tony then retired the second time in January 2005 after serving 15 years as a civilian contractor for ARINC Engineering and helping to usher in ground breaking technology of GPS for the military. In January of 1967, Tony married his soul mate, Virginia Beth Dagerath from Coupland, Texas. For the past 51 years they cherished each moment together. Tony and Gin thoroughly enjoyed their years in the Air Force as they traveled and experienced the world. They continued to enjoy each other, friends, family, and life in general during the36 years while living in the “Beach Cities” of Southern California. Tony lived his life by the core values of honor and integrity. He never knew a stranger and was always willing to lend a helping hand. Tony was active in the local community serving as a volunteer at the Western Museum of Flight and talking about his love of aerospace, showing young visitors the cockpit of the F5 Jet. He is a long standing and proud member of the Red River Valley Fighter Pilots Association (RRVA), MOA, ION, and VFW. In lieu of flowers, contributions may be made to the Air Warrior Courage Foundation (AWCF). The AWCP is an affiliate of Red River Valley Fighter Pilots Association (RRVA) and provides scholarship assistance to dependents of POW/MIA/KIA military personnel. Send to P. O. Box 877, Silver Spring, MD 20918; www.airwarriorcourage.org OR to the Iowa State University Foundation, to benefit Aerospace Engineering at Iowa State University, 2505 University Boulevard, Ames, IA 50010. Memorial service is pending. High Flight John Gillespie Magee, Jr Oh! I have slipped the surly bonds of earth, And danced the skies on laughter-silvered wings; Sunward I've climbed, and joined the tumbling mirth Of sun-split clouds, --and done a hundred things You have not dreamed of --Wheeled and soared and swung High in the sunlit silence. Hov'ring there I've chased the shouting wind along, and flung My eager craft through footless halls of air... Up, up the long, delirious, burning blue I've topped the wind-swept heights with easy grace Where never lark or even eagle flew -- And, while with silent lifting mind I've trod The high untrespassed sanctity of space, Put out my hand, and touched the face of God.