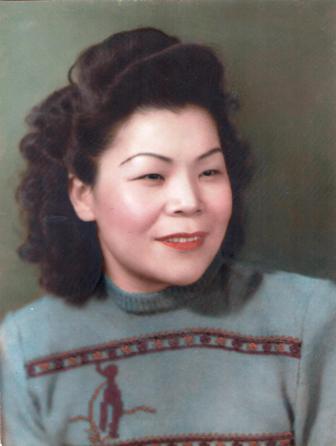 Ann Marie Dosa Was born to father Tsu Tsung Woo and mother Tsu Chow Chu in Shaoshing Province, China. Her mother died quite young, and Ann was sent to live with her grandparents, while her father established his business as a tea merchant in Shanghai. Some of Ann's most fond childhood memories were those spent with her grandmother on the family vineyard and farm. At the age of twelve, her father remarried, and she was whisked off to a new life in cosmopolitan Shanghai, their home in the French Concession. The family struggled through the Great Depression and the Second World War, and although there were many hardships, they were better off than most. Ann told of working for her father, helping with his business - she had no formal education, but a good head for numbers. Life returned to some normalcy, and she recounts enjoying the offerings a large western-style city offers - the theater, restaurants, pedicabs, department stores and friends. Little did she know her life was about to add a new and exciting chapter. Although many stories circulate about how Ann met her soul mate George, suffice to say it involved a bit of serendipity, the Naval Liberty bus, mutual friends, a tea garden and two very surprised people. Before long, George asked for her hand in marriage and, with no approval from the US Navy, they were married in December 1948 at Christ the King Church in Shanghai. After George was sent back to the states, Ann followed two years later, just evading the Communist takeover. She was never to see her family again. Welcomed with open arms by her in-laws - George's parents George and Margit Dosa, sister Margaret and Len Rice, Ann and George began their new life in the States. They settled in Los Angeles, adopted three children - Marianne, Mark and Susan, and eventually made their home for the next five decades in Gardena, CA. She enjoyed the monthly "Joy Luck Club" meetings with her lifelong friends, played a mean hand of canasta (she usually won), enjoyed cultivating her garden, baking and cooking, and of course, she cleaned. A lot. Always very independent, Ann attended adult school, spent many hours on her homework with George's help, and after several years received her 8th grade diploma. She continued her education at Hamilton Adult School, walking to and from school at a pace that stunned any on-looker. After George retired, they motored around the US and Canada in their tidy RV, and toured China in the 1980s. After a leg injury, Ann took up a fitness routine that lasted nearly 3 decades - she took to treadmills, yoga balls and weight machines like a fish to water. When George became gravely ill in 1996, she spent every day for nine months caring for him until he returned home. Her dedication made his miraculous recovery possible. You might say caring for George was her lifelong passion. Ann doted on her grandchildren Jayci, Josh and Nick, great-grandchildren Luke, Luciana and Liam, son-in-law Frank and grandson-in-law Mark. The time spent with loved ones brought her the greatest joy. Her devotion to her faith was also a source of great comfort. Although losing her breaks our hearts, she will once again be welcomed to a new land by open arms.