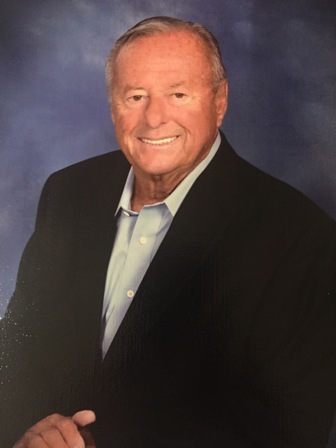 Angelo Gus Revels was born in Los Angeles on March 25, 1930. He was the middle child born to Greek immigrant parents, Constantine and Harriett. He was a member of the early Los Angeles Greek Community. Angelo married Billie Siokos in 1958 at Saint Sophia Greek Orthodox Cathedral and they soon moved to Torrance, where he was a long time proprietor of Angelo Revels Bakery. They had three loving daughters; Melanie O'Regan (Chuck - blessed memory), Angela Furkioti (Dean) and Alyssa Stanford (William) and six grandchildren: Alexis, Tessa and Deano Furkioti, Whitney and Ryan O'Regan and Eliana Stanford. He was preceded in death by his sister, Bessie, and is survived by his brother Tom (Joyce). He was a devout steward at Saint Sophia Greek Orthodox Cathedral and Saint Katherine Greek Orthodox Church where he served on the parish council for 25 years, on three building committees (including one at present), and founded the youth group over 50 years ago, and was currently serving as president of the Saint Katherine Foundation. He was a proud veteran of the U.S. Army serving during the Korean War (1951-52) where he spent 9 months on the front line. He enjoyed golf, tennis and most of all his morning walk on the Redondo Beach esplanade where he was known to all who passed by. Angelo was a loving and devoted son and brother, an adoring husband, a proud grandfather, a loyal friend and the best dad ever. He had a charismatic personality which afforded him the benefit of friendship with all whose paths he crossed. He had tremendous generosity of spirit; a truly magnanimous man, and will be deeply missed by all whose lives he touched. Trisagion services will be held on Sunday, December 11th at 5:00 p.m. and the funeral will be on Monday, December 12th at 11:00 a.m. Both services will take place at Saint Katherine Greek Orthodox Church located at 722 Knob Hill in Redondo Beach. In lieu of flowers donations may be made to the Saint Katherine Building Fund or the Saint Katherine Foundation.