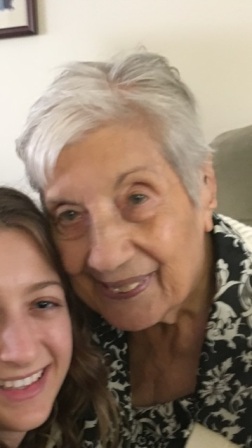 Angie’s amazing life began on January 27, 1925 in Omaha, Nebraska. The youngest of six children, she was raised on a farm by her Italian immigrant parents, Giuseppe and Giuseppa Rossitto until she married the love of her life, Pete Sesto, in 1944. Angie and Pete lived in Omaha raising their four children until November 1958 when they made the move to Southern California. Angie was dedicated to raising her children and managing the household for more than twenty years as her daughters married and had children, her older son served in the army, moved to Alaska and raised a son, and her youngest son moved to Nevada to begin his career in the field of education and eventually help raise two children. Angie had a heart of gold. For many years she loved to cook and feed the flocks! Angie and Pete were frequent golfers and they loved entertaining family and friends at their homes in Inglewood and Redondo Beach. Angie always loved the beach and long walks by the ocean. During her final years, she made daily requests for rides to the beach! Sadly, yet peacefully, she left us on Monday, November 6, 2017. A viewing service will be held on Monday, November 13, 2017 from 4PM - 7PM at Rice Mortuary, 5310 Torrance Blvd, Torrance, CA. Memorial Mass will be held on Tuesday, November 14, 2017, 10AM at St. James Catholic Church, 415 Vincent St, Redondo Beach, CA. A reception will follow at Rice Mortuary, 5310 Torrance Blvd. Entombment follows at Holy Cross Cemetery, 5835 W Slauson Ave, Culver City, CA.