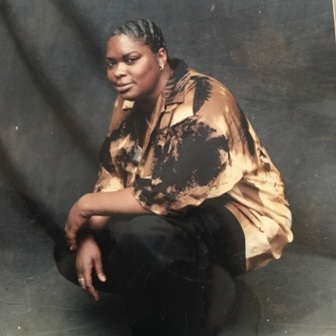 Angela Eugenia Bullard was born in Chattanooga, Tennessee on May 17, 1965. She was the second eldest of her siblings; Anthony Bullard, Jr. (deceased), Evonda Bullard, and Antramone Bullard. Parents: Anthony and Evelyn Bullard (deceased). The family headed west in the early 70's after the passing of their loving father for a new start with sunny weather and brighter days. Angela known by many that loved her as "Angie B"… graduating from Washington Preparatory High School in Los Angeles, California in 1984. Shortly after graduating High School, Angela joined the US Navy and quickly found out that she didn't like taking orders and all the other responsibilities that came along with being in the military. After a few months she made her exit. Growing up in South Central Los Angeles during the 80s & 90s Angela overcame a lot of hard-knock life challenges and through it all she remained true to herself. She never let hard times or circumstances shape her as a person. She remained positive and always greeted everyone in the same manner with a loving smile. She loved her music from oldies to hip hop today. She quickly related to the musical group "The Sequence" and loved their hit song - "Funk you up" which is where the term "Angie B." derived and stuck like glue. If you ever sat down for a conversation or a drink with Angela you would soon find out why so many people have such respect for this incredibly beautiful, gentle, loving soul. She was very proud of becoming a mom to her beautiful daughter Mirica Lewis in 1991, and showed her love and affection everyday of her life. She became a grandparent in 2009, welcoming Emilly Blessing Childress - just don't call her grandma. Again, she always smiled in conversations about her grandbaby. Angela shared a home with her devoted partner Letitia LeBlanc since early 2000. They had a commitment ceremony in 2003 and shared plenty of pet names for one another throughout the years which I will spare you all. These two loved each other like no other. Our entire family was very pleased that Angela had finally found someone that loved her in the way she deserved. They shared a home with Letitia and her two sons, Lance and Lucas Barquet whom Angela helped to raise over the years along with Jasmine Barquet whom after High School moved to pursue College aspirations. Angela Bullard worked as a Certified Nursing Assistant at View Park Convalescent Center in Los Angeles, CA from April 2001 to August 2016. Angela is survived by her sister, Evonda Bullard, brother, Antramone and wife Tasha Bullard, daughter, Mirica Lewis, granddaughter, Emilly Childress, and a host of uncles, aunties, cousins, and other relatives and dear friends that will miss her dearly.