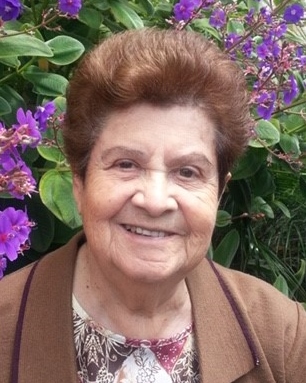 Angela Conlon passed away on January 6, 2019 at Torrance Memorial Hospital in the presence of her loved ones. Angela was born in Santiago, Chile to Francisco and Blanca Jara in 1929. Her earlier years were spent as a grade school Teacher before becoming the first woman Cartographer for the Chilean Army. She came to the United States in 1963 to study advanced Cartography for her career. In 1964 she married the love of her life Ronald Conlon and had three beautiful children together. She worked for several years at the Lennox School District teaching Special Education children. She was also the Secretary for the Grupo Guadalupano at St Catherine’s Laboure for many years. Angela led a long and beautiful life. She left her imprint on everyone that knew her. The world lost a ray of light when Angela went to be with the Lord. Angela is survived by her loving and adoring husband; her three children Ron, Pat, and Dianne; her step-children Dennis and Sherry; her eleven grandchildren and six great-grandchildren. Viewing and Rosary will be held on Sunday January 13, 2019 at Rice Mortuary, 5310 Torrance Blvd., Torrance CA 90503 from 2pm to 6pm. Funeral will be held on Monday January 14, 2019 at St. Catherine Laboure Church in Torrance at 10:00am. Burial will be conducted after funeral at Holy Cross Cemetery and reception to follow.