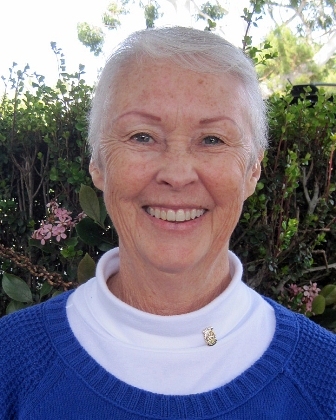 Angela Cantrell Peterson October 26, 1946 – July 6, 2014 Angela Peterson passed away peacefully at home on July 6th after a courageous eighteen month battle with uterine cancer. She was surrounded by her husband of 45 years, Steve, her son Cory, daughter Rachael Thompson, and sister Nancy Romerdahl. Angela Cantrell was born in Knoxville, Tennessee to John and Vivian Cantrell of Corryton. She was the youngest of four children. In 1952 the family moved to California so that her father could take a job at Douglas Aircraft. During her grade school years, the family lived mostly in Manhattan Beach and occasionally in Lancaster. She graduated from Mira Costa HS in 1964 in the same class as her future husband, Steve Peterson. After attending El Camino, Angela headed north, ending up in San Luis Obispo, and after getting a job at Cal Poly, started classes, and re-met Steve playing mixed-doubles volleyball. They became partners on the court and shortly thereafter became partners in life, marrying in 1969. Angela finished her degree at Cal State Dominguez Hills, received her Teaching Credential at Loyola and begin teaching in Torrance. Steve and Angela purchased a home in Hermosa Beach where they have lived happily ever since. After Rachael and then Cory were born, Angela spent nine years at home making sure her children, and several neighbor children as well, had a good foundation for school and life in general. She began teaching again at Hermosa Valley School as Language Arts and Social Studies teacher for 6th-8th grades. She loved teaching, loved the children in those middle school years, and was always pleased when her former students would run into her around Hermosa and tell her what they were doing in their lives. Angela retired in 2003 so that she could travel with Steve, but also took two important steps that would largely define the last eleven years of her life. First, she decided sobriety was necessary for her to enjoy the rest of her life, so she joined AA. She was a regular at the Alano Club's morning meeting where she was mentored by many wonderful people and where she was able to mentor others in their recovery. Second, she joined the Hermosa Beach Rotary Club, where her energy, skills, and desire to help others both in the community and internationally were put to good use. She was club president in 2007-8 and has been Executive Secretary for several years. She embodied the Rotary motto: Service Above Self. When her first grandchild, Natalie, was born in 2010, Angela stepped into the role of "Gramma" as if she were born for the job, and her joy was doubled when Vivian was born in 2012. She felt blessed that both of her children and her grandchildren live close by so she could share with them the precious waning moments of her life. Angela is survived by her husband, Steve, her two children Rachael (Tim) Thompson and Cory Peterson, her grandchildren Natalie and Vivian Thompson, her sister Nancy Romerdahl, and brother George (Sonya) Cantrell. Brother Jim (Beth) Cantrell preceded her in death. A celebration of Angela's life will be held July 18th, at 2:30pm at the First United Methodist Church in Redondo Beach, 243 So. Broadway (at Torrance Blvd.). Please arrive early as parking may be difficult. As a guide to those who wish to attend, the family will be wearing bright colors to honor Angela's shining spirit. In lieu of flowers, donations may be made to the Rotary Club of Hermosa Beach Foundation (2125 Valley Drive, Hermosa Beach, CA 90254) or the South Bay Alano Club (702 11th Pl., Hermosa Beach, CA 90254).