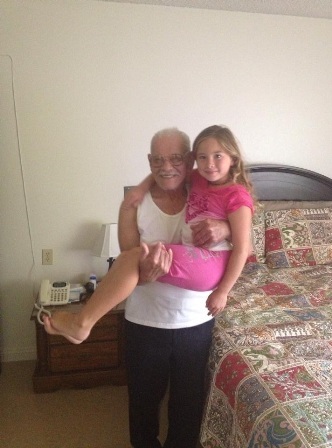 Angel Fernandez - October 2, 1934 - July 7, 2014 Angel died peacefully at home with his daughter Eva and niece Elsa by his side, on July 7, 2014. He was born in Aguas Buenas, Puerto Rico, on October 2, 1934 to Toribio Fernandez and Ramona Marcano Fernandez. He lived there until he was sixteen years old and then moved to New York City where his two brothers and two sisters were living. He worked in a paper factory for many years than as a butcher in a meat packing company for the remainder of his work life. In 2012 he moved to Redondo Beach. He and his niece Elsa enjoyed walking on the beach and the Pier, doing puzzles, playing dominoes and cooking. They were like brother and sister and shared many stories about the family. He loved living in Redondo Beach. He is survived by his daughter Eva and son Joseph, five grand children, three great grand children, many nephews and nieces and friends. Our Father above now holds you in his arms and the Angels will forewer keep in from harm. We love you so much and shall miss you dearly. The viewing will be at White & Day Mortuary, 901 Torrance Blvd, Redondo Beach, CA 90277, on Monday, July 14, 2014 from 4pm to 8pm. Graveside service will be at Green Hills Memorial Park, 27501 S Western Ave, Rancho Palos Verdes, CA, on July 15, 2014 at 2pm.