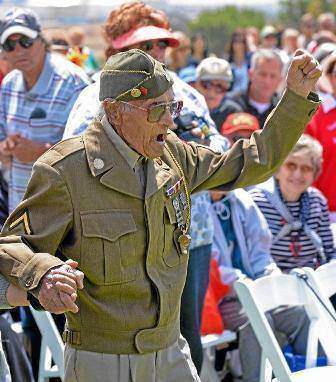 Angel Banuelos passed away on July 11 in the quiet of his home. He was surrounded by family and friends. He was born on February 15, 1923 to Domingo Banuelos and Urbana Menchaca, in Topeka Kansas. He is survived by his wife of 67 years, Mary Banuelos (Perez). Angel had two children Michael, and Rebecca. He had four grandchildren, Michelle, Estevan, Melissa, and Alissandra. He also had one great grandchild, Andrew McDonald. They all knew him as Papa. Angel had three brothers, Larry, Domingo, and Luis, and one sister Pauline. When he was nine years old his mother moved from Kansas, after his father's death in 1929. They moved to Chatsworth, California and then to Canoga Park, and eventually to Boyle Heights. During this time his mother Urbana remarried to Fidel Hernandez. They had 4 more children, Alfonso, Margarito, Rosa, and Albert. And now there were 9 children. Growing up Angel loved nature, this continued thru his life. He loved camping, fishing and hiking. He taught his family how important it was to stand still and be part of nature. In March 1943 he was drafted into the Army. He was at Fort Riley Kansas for basic training and then onto Camp Shenango, Pennsylvania. From there he was deployed to Scotland. There he joined the 5th infantry division, MP platoon. He received the Purple Heart after being wounded in Metz. After 13 days in the hospital he returned to his division, who was fighting in the Battle of the Bulge. He was awarded various medals, one special one was given to him from the Belgium Government. This was one the Croix De Gueree with palm. On October 7, 1945 he was honorably discharged from the Army. He went back to Boyle Heights, CA, where he eventually met Mary Perez from Lincoln Heights. They married on April 6, 1947. They moved to Torrance California where he was employed by Mobil Oil refinery. He worked there for 35 years and retired as a foreman. He enjoyed working there and made some lasting friends. He also was a big prankster, playing pranks on fellow employees, as well as his bosses. He had a saying, "You name it, we did it, and sometimes we didn't". Angel loved his family. He enjoyed playing with the neighborhood kids, so much that they would knock on the front door and ask Mary if Angel could come out and play. He was a excellent teacher and willing to help anyone. He will be missed by his family and all that knew him. And the memories of him will last in all our hearts. Services will be at Rice Mortuary 5310 Torrance Blvd. Torrance, Ca. 90503, at 10:00 AM on July 21, 2013 after which there will be food served in banquet room. Burial will be at Riverside National Cemetery 22495 Van Buren Blvd. Riverside, CA. 92518 on July 22, 2013. at 12:45pm.