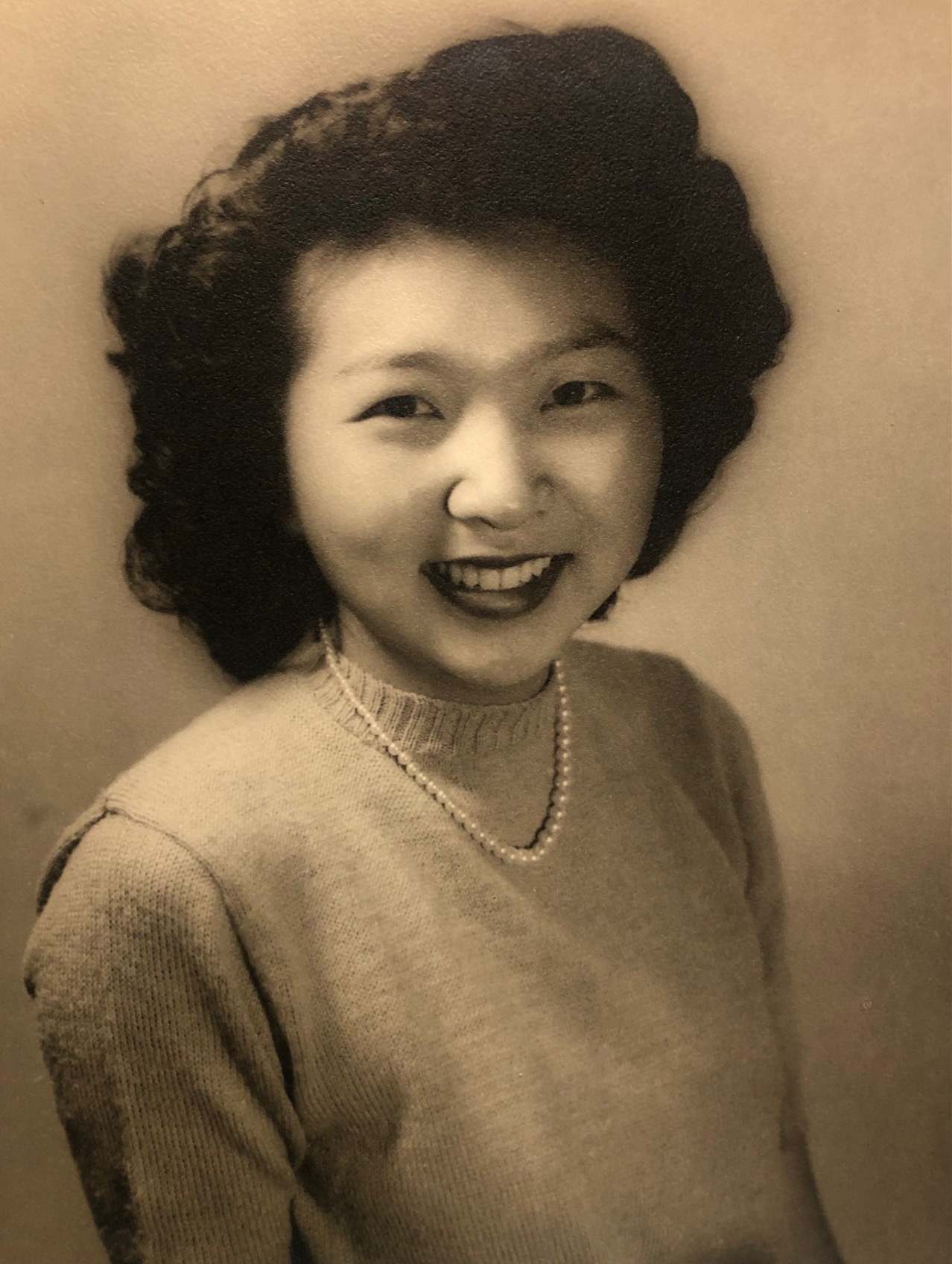 Amie Matsumoto was born on December 4th, 1930 in Los Angeles, CA and peacefully passed away of natural causes in her sleep at her Gardena home on May 4th, 2022. It was her 91½ birthday. She is survived by sons, Randy and Ronald Matsumoto; grandchildren, Megan (Trevor) Tress and Bret Matsumoto; and is also survived by nieces, nephews, and other relatives. Her body was laid to rest at Green Hills Memorial Park in a companion plot with her husband of 60 loving years, Gene Matsumoto.

Amie was the youngest of one sister and four brothers. Her much older sister, Alice, named her after the French female word for “friend”, which was perfectly fitting for the woman she was to become. Amie was always a simple and happy child, even through her early teen years at the Heart Mountain, WY Japanese internment camp during WWII.

Amie had a sweet endearment toward animals from an early age. Her fondness for pets began with her childhood cat that had disappeared a few days before her family was forced to leave their home during the war. She would recall that this was her saddest loss in going to camp. Later, her future family dogs (Rexie, Puppy, and Jewel) would remain very near to her heart for the rest of her days.

Amie’s mother passed away of cancer while in camp, so she went on to live with her older sister Alice and family. Amie had very fond memories of her teenage years with her Delta Chi girlfriends of Belmont High School, often remembering playing basketball, playing cards, caroling, and even staying up all night a couple of times for Easter sunrise church services at the Hollywood Bowl.

Amie graduated high school in 1949 and her father passed away later that year. She went on to attend the Metropolitan School of Business, then worked for The Ver Halen Publishing Co., publishers of “film world, home movies, teaching tools, and TV newsmagazines”.

Gene and Amie met in 1950 through mutual friends. As she would always recount, “he was the most handsome man I had ever met” and “very outgoing when other Japanese boys were very quiet”. They married on June 11, 1952 which sparked her lifelong love for Gene’s family as her own.

In 1957, Amie quit her job at the publishing company to start a family. Her coworkers showered her with words of praise for both her stellar work ethic and heartfelt friendship.

Amie’s joyous years as a wife and a mother were marked by her picturesque role as an all-American, fifties housewife. She was always giving of herself, living her life for her family and others.

At home, she dawned an apron and flip flops with socks (“zori’s” as she called them), and always styled well for any occasion out with a perfectly pressed outfit and classic handbag. She relished in the joy of a spotless home for her family, cleaning down to every last crystal piece on the dining chandelier. She would often be found sewing, ironing, cooking, baking, canning, laying out clothes for her boys, etc. She also used her administrative skills to help with Gene’s insurance business and was genuinely proud of her husband’s accomplishments.

Gene’s career achievements took them on many destination travels, but overall Amie enjoyed her quiet, simple life at home with her family. She also loved getting together with her childhood Delta Chi friends, or, “the girls”, as she would always so fondly refer to them.

Amie gained a daughter-in-law when Randy married Michelle (“Nana”) in 1987. Nana and Amie had a strong, loving connection that lasted even after Randy and Michelle were no longer together. Amie became a grandmother when Randy and Nana gave birth to Megan in 1988, then welcomed grandson Bret in 1990. Just as she thrived as a mother, Amie was every grandchild’s dream. From crafts to baking to playing house or Cinderella, Amie’s grandchildren adored their time with her and were always excited to visit. As her grandkids got older, Amie continued to bring cheer to their hearts through the food and festivities she lovingly prepared for every holiday occasion.

Although she didn’t see herself as a very talented cook, she received lifelong praise from her family for being the world’s greatest family chef, a title that they still stand by to this day.

Her family surrounded her with love for all of her days, especially in her final years with son Ron and grandson Bret both graciously living with her to help care for her increasing needs. Also in her last couple of years, Amie took particular interest in reading John Piper’s book, “Coronavirus and Christ”, which shares about the brokenness of this world and the answers God has for us. Amie was not known to read much outside of the daily newspaper, but this was a book that she chose to read multiple times in her final years. Amie had professed to be a Christian since she was young, but this was the first time she gave such personal effort toward knowing what this truly means.

In closing, here is an excerpt from that book:

“Awake or asleep—that is, live or die—I will be alive with God. How can that be? I am a sinner. I have never lived a day of my life—not one—without falling short of God’s standards of love and holiness. So how can this be? How can God say, “You, John Piper, will be with me—live or die”?

God didn’t even wait for the question before he answered. It’s because of Jesus. Jesus alone. Because of his death, there will be no wrath toward me. Not because of my perfection. My sins, my guilt, and my punishment fell on my Savior, Jesus Christ. He “died for us.” That’s what his word says. Therefore, I am free from guilt. Free from punishment. Secure in God’s merciful favor. “Live or die,” God said, “you will be with me.”

That is very different from playing the odds with cancer—or with the coronavirus. This is a firm Rock under my feet. It is not fragile. It is not sand. I would like it to be a Rock under your feet.” (p. 13-14)

*Please post messages and memories in the Guestbook below, as well as “View the Timeline” of pictures or even “Add a Memory to the Timeline”.*