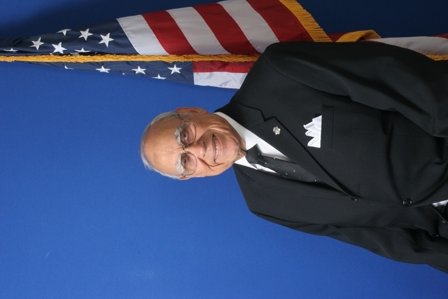 Amador B. Espinosa passed away peacefully surrounded by his family on May 9, 2013. He was born on August 20, 1923 in Gardena, California. His family moved to Redondo Beach three years later and was a lifelong resident. He served in the Army Air Corps from 1943 to 1945, taking part in 30 bombing missions. After the war, he went back to his job at the local theaters in Redondo Beach. He was a hardworking man, holding down another job at Marshall Anderson, a produce company in Los Angeles. He also went to Woodbury College completing a coursework in Foreign Correspondence. One day a police captain from Redondo Beach asked if he wanted to join the police department. Amador thought it was a good idea and went through the application and testing process. The 1950s was not an easy time for Mexican-Americans. Though he was qualified for the job, he was denied the position due to his race. This did not deter Amador from serving his community. He took the next best position at the Administration Division of the Redondo Beach Police Department. He began his career as a Clerk Stenographer in 1956, working his way up as Administrative Secretary to the Chief of Police, serving 8 Chiefs over his 37-year career. He was responsible for numerous tasks, including managing the Chief's day to day schedule, court paperwork, personnel transactions, correspondence and acting as an interpreter. Serving the community is in Amador's DNA. Taking only about a 6-month hiatus after his retirement in 1993, he came back to the Redondo Beach Police Department as a volunteer, a task he joyfully tackled for 19 years. He has served the RBPD and the community for a total of 56 years. Amador thought of others first before himself. He was dedicated and loyal to the Redondo Beach Police Department and its members. If you were to look up the following words in any dictionary: public servant, generous, thoughtful and selfless –Amador's picture would be there. He is survived by his children – Paul, Ann, Kathleen (and Gary), and Stephen; and grandchildren – Angela, Jaclyn, Brigitte, and Eric. Visitation will be from 5:00 PM to 9:00 PM on Wednesday, May 22, 2013 at Rice Mortuary 5310 Torrance Blvd, Torrance CA 90503. Funeral Mass will be at 10:00 AM on Thursday, May 23, 2013 at St. James Church 415 Vincent, Redondo Beach CA 90277, followed by the interment at Pacific Crest Cemetery – 2701 182nd St. Redondo Beach, CA 90278. In lieu of flowers, donations in memory of Amador Espinosa may be sent to the Salvation Army Redondo Beach – 125 W. Beryl St, Redondo Beach CA 90277.