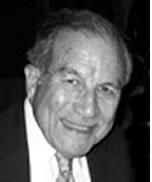 Al Valdes, born April 17, 1930 in Los Angeles to Alfonso Valdes and Julia Beraud, died peacefully at home Sunday, May 13, 2012 after losing his battle with Parkinson's Disease. He was a longtime resident of Hermosa Beach and served as a Hermosa Beach planning commissioner in 1964 and '65, was elected to the City Council from 1966 to 1974 and was Mayor in 1967 and 1972. Al and Naoma Valdes married in 1955; they were together for 57 years. He also leaves his close family, consisting of his son Todd Valdes, Todd's wife Leilani, and grandchildren Alexander, Nicholas and Caroline; his daughter Sherry Slosson, her husband Richard, and grandchildren Eric Slosson and Jenna Slosson Narayanan, her husband Satish and great-granddaughter Maya Narayanan; and his sister Maria del Carmen Brambila. Al was a dentist in Redondo Beach for over forty years; after retirement he served as a member of the faculty at the USC School of Dentistry for ten years and volunteered for many years at the South Bay Free Clinic. He graduated from Los Angeles High School and the University of Southern California School of Dentistry. Before attending dental school, he served in the California National Guard during its deployment in the Korean conflict. He loved books, skiing, golf, and was an ardent USC football fan - never missing a home game for almost 60 years. At his request there will be no service, but friends and family are invited to celebrate his life and share memories at a reception starting at 6:00 p.m. on Thursday, June 7th, to be held at the Portofino Hotel in Redondo Beach.