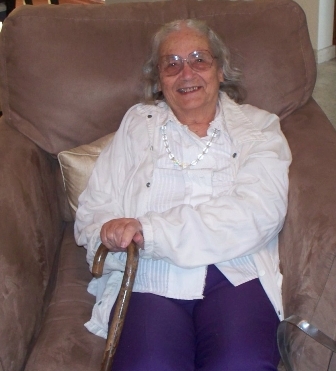 Alice "Brownie" Nichols (nee Newby) passed away on the evening of Monday, June 8, 2015 in Torrance, California. She was born on a farm outside of Wellston, Oklahoma on April 23, 1926 to Harry and Vesta Newby. She was the sixth born of what would be a total of fourteen children. During the time of the great drought that spawned the Dust Bowl era the family was forced to travel the migrant trail in and on a flatbed truck seeking work as far west as California but with the majority of their time spent in Arizona. The family was able to return to the farm as World War II loomed and Alice worked in an airplane factory during the war. She met Walter in 1946 when he stopped by the candy counter at the Woolworth's five and dime in Oklahoma City where she worked. The couple married three weeks later, would have nine children, and continue together until Walter's death in 1994. The couple lived in Wellston, Oklahoma; Tacoma, Washington; Queen Creek, Arizona; Oxnard, California; Riverside, California; Lancaster, California; Oklahoma City, Oklahoma and Echo Park, California before settling down in Lawndale, California in the last half of the 1950's where she resided until her death. Alice's second born son, Harry Wayne Nichols, was lost in a tragic automobile accident in 1953 and her last-born son, Robert Paul Nichols, died from accidental poisoning in 2000. Alice called herself a homemaker but she was much more to her family. They considered her the Nichols' matriarch who kept the family connected through her extensive letter writing and she was a most favored pen pal to several of her grandchildren. Alice is survived by her sister Nancy Harris of Scottsdale, Arizona; brothers Jack Newby and Robert Newby of Chandler, Arizona; brother Joe Newby currently residing in Mexico; son Fred Nichols of Hermosa Beach, California; son Sam Nichols of Calimesa, California; daughter Alice Nichols of Banning, California; son John Nichols of Torrance, California; sons Joe Nichols and Charles Nichols of Lawndale, California; daughter Vesta Nichols-Shintani of Torrance, California. Alice was also grandmother to fourteen and a great-grandmother to eighteen children. Services will be held Saturday, June 20, 2015 at Rice Chapel located at 5310 Torrance Boulevard, Torrance, California, 90503. Viewing is at 1:00 pm with the memorial service to begin at 2:00 pm. There will be a reception following the memorial service in the Rice Lighthouse Reception Room located at the same address. There will be an additional viewing at the Lehman Funeral Home located at 334501 East Highway 66, Wellston, Oklahoma, 74881 from 4:00 to 6:00 pm on Friday June 26, 2015. Interment will take place at the Newby Family Cemetery on Saturday, June 27, 2015 at 2:00 pm where she will be reunited with her husband Walter and son Robert.