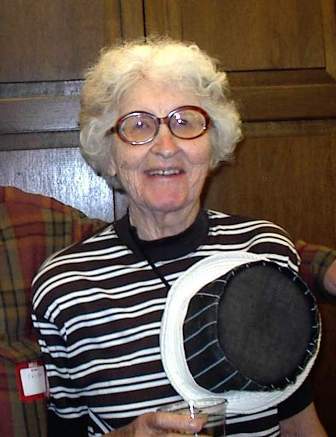 Alice Cecelia Hanratty passed away peacefully on February 15, 2015, at the grand age of 96. Alice was a unique lady who lived a life of independence and adventure. She was born on December 9, 1918 in Barry, Minnesota to Patrick and Lillian Hanratty. Patrick was a man ahead of his time, and believed a college education for was essential for his daughters. Alice graduated from St. Benedict's College with a BS. Thereafter, she served in the Women's Army Corp and was stationed in England during WWII. After her military service, Alice moved to San Jose, CA and continued working as a nutritionist; later she worked as a social worker and public school teacher. Alice retired to the beautiful town of Capitola Beach, then later moved to the South Bay to be near family. Alice loved life and she loved the Lord. Although her vision was limited, she did not let that slow her down. She loved to walk and was well known in Capitola as "the lady in the hat." She was a great sport and up for any kind of adventure, especially if it involved music or dancing. In recent years Alice traveled quite a bit with family. In Jamaica, she danced the limbo, smoked cigars and drank pina coladas every night. In Dublin, Ireland, Alice took great delight in discovering "The Hanratty Hotel." At her family reunion in Minnesota, she was the hit of the party; she was the hit of every party. Alice leaves behind numerous nieces and nephews, who will always remember her with a smile, a laugh and a great story to tell! She also leaves behind her loving caretakers, Linda and Elsie, who were with her until the end. Despite numerous suitors, Alice never married; but she always said "My life turned out exactly the way I wanted it." Funeral mass will be at St. James Church in Redondo Beach on March 14, 2015 at 12:30. A private military burial will be held at Riverside National Cemetery on March 16, 2015.