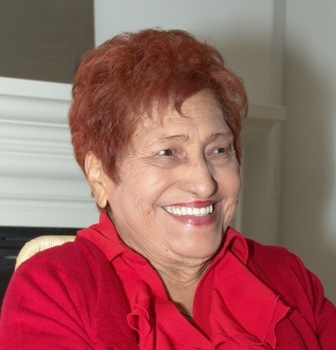 Alice Lillian Buffington (née Lopez) died peacefully surrounded by her family at home on September 14, 2014 in Redondo Beach, California at the age of 87. Alice is survived by her children Darlene (Steve) Newman, Henry Felix, Mary Basil, Paul Felix, Richard Felix, Michael Simpson, Charlie Buffington; grandchildren Julie Morales, Stevie Newman, Maryalice Gonzalez, Paulie Felix, Rachel Corral, Ricky Felix, Joey Felix, Jennifer Williamson, Mikie Simpson; great grandchildren Jacob, Lilly, Leila, Lorali, Justiz, Sabrina, Marisa, Gaby, Christeena, Gracie. she is preceded in death by parents, Jose and Sadie Lopez of Hermosa Beach, Sisters Della (Isaac) Orozco, Clarita (Earl) Young, husband Charles "Chuck" Buffington. Alice, born December 5, 1926 in Palms California was a direct descendant of the Spanish rancho families that first settled California, Soto (1769, San Francisco) and Ybarra (1781, San Diego), including being related to the original 11 Spanish families that settled the City of Los Angeles, she was also related to Pio Pico, the last Mexican Governor of California. She was proud of her heritage. At 5 years of age, she moved to Hermosa Beach and after her marriage to Charles Buffington and the birth of her 7th child, she moved to her current residence in Redondo Beach. Living in the south bay for many years, She attended Redondo Union High School as did all of her children and some grandchildren. Alice worked many jobs over the years including riveting airplane wings for Douglas Aircraft bombers for WWII. Alice loved to dance. You could find her with her cousins and girlfriends on the Red Car to Venice or bus to Lawndale to catch the street car to Los Angeles and dancing at the clubs right up to nearly missing the last car home. Dancing was such a joy, she danced all of her life. Chuck and Alice danced many years, every Sunday with the Sunshine Club at the VFW Wilmington as well as any event in the area they could find. She was friendly and loved to socialize, playing bingo, member of fraternal organizations such as Redondo Moose. Another pastime she enjoyed was playing slot machines, where she was often a winner. A Viewing will be on Monday, September 22nd from 5pm-9pm with a Rosary at 7pm, at Rice Mortuary, 5310 Torrance Blvd, Torrance, CA, (310) 792-7599, The funeral service will be on Tuesday, September 23rd at 10am at Our Lady of Guadalupe Catholic Church, 320 Massey St, Hermosa Beach, CA, (310) 372-7077, a half block from her home, Interment will follow at Holy Cross Cemetery, 5835 W. Slauson Avenue Culver City, CA, (310) 836-5500. The reception will follow at The Red Onion, 736 Silver Spur Rd Rolling Hills, CA, (310) 377-5660. For those unable to attend, condolences may be sent to her home at 1612 Carlson Ln., Redondo Beach, CA 90278, (310) 372-9519.