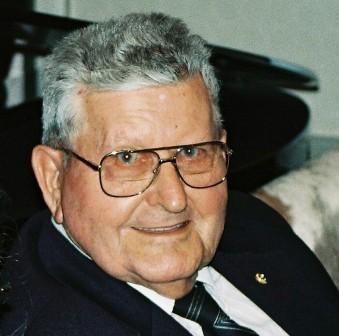 Alfred "Al" John Schafer, along with his twin brother Wilfred, was born on October 11, 1924 to Clara and William Schafer in Columbus, Nebraska. He lived on a farm near Cedar Rapids until March 1, 1937 when the family moved to Albion. The twins were the eldest of 11 children. He entered the US Army on 05-11-1943 with his twin brother. He reported to Fort Leavenworth, Kansas and did basic training at Fort Knox, Kentucky and became a tank driver. He reported to Camp Bowie, Brownsville, Texas to the 4th Armored Division where he exchanged his Tank Drivers License for an M1 Carbine in the Infantry. He went to Boston, Massachusetts, and from there he spent the war in England, France and Germany. After 5 1/2 months of combat he went to Harrogate, England then Tidworth, England to Camp Kilmer, New Jersey, and Fort Leavenworth, Kansas for discharge on 12-21-1945 as a Staff Sargent. He served under General George Patton, 3rd Army, and General Omar Bradley, US 12th Army Group. Shortly after "Normandy" he was at St Lo when allied forces using 2500 aircraft dropped 4000 tons of bombs on an area 7 miles long and 2 miles wide and after difficult advancement the allies breached the German line and broke out of the peninsula. From there he went on to fight at Mayenne, Lavel, La Mons, Reims, Verdun, Saint-Michell and to the Rhine River. Due to wounds and "trench foot", a few days prior to the Battle of the Bulge (12-16-1944), he was sent back through Paris to a hospital at Harrogate, England. He received the Bronze Star for bravery, the Purple Heart for wounds, and the Combat Infantry Badge. He returned to the United States aboard the HMS Queen Mary, a luxury liner converted to a troop carrier for the war effort. While recovering from his wounds at Harrogate, he met his one true love, Mary Holroyd. In his own words, "I saw her come into the ward and I said to myself, 'That is the woman I am going to marry.'" And marry her he did, on June 9, 1945, in Bradford England. After returning to Nebraska, he took up farming but tragically his crop was killed by an early frost and he and his family relocated to town in Albion, where he sought work as a trucker. In the mid 50's an opportunity came up as a delivery driver for Coca-Cola. He did that until 1957 when after much soul searching he and Mary decided to relocate to Southern California with their sons John, Stephen and David. They arrived in Torrance in April of 1957 and never left. Their daughters MaryLisa and Teresa and son Chris were born in California. Al went to work for Hostess Cake immediately upon arriving in California and continued his employment there until his retirement in 1984. Al's faith was very important to him and he was an active member of the St. Catherine Laboure parish for more than 50 years. He served as Vice President of The Saint Vincent De Paul Society for 30 years and in 2009 he was so very proud to receive the Top Hat Award from the Archdiocese of Los Angeles. The Top Hat is the highest award presented by the church for dedication and service. Al's family was the most important thing in the world to him. He was proud of each one of his children and never failed to tell them he loved them. Even more than telling them he showed them. He spent every vacation as a family vacation, was home every night, attended their awards presentations, graduations and all other important events. He also instilled in each of them a profound work ethic. His love of his children extended to his grandchildren and great grandchildren. He loved to travel and after he retired, he and Mary took many trips that included much of the United States and England. Al is survived by Sons David and Chris(Maggie), Daughters MaryLisa and Teresa(Bill), Grandsons Jesse(Danesha), Jeremy(Susan), Jacob(Julie), Lucas, Matthew, Paul(Johanna), Stephen(Heather), and Alex, Granddaughters DeAna, Rachel, Mary(Steven), Emily and Sara, Great-Grandsons Daniel, Dylan, Ransom, Michael, Zachary, Jeremy, Ryan, Wyatt, Alexzander, Thomas, Moses, Brandon and Michael, Great-Granddaughters Hannah, Leia, Alexzandria, Kaylee and Aurora, Brothers Bud, LaVerne, Jim and Leroy, Sister Loretta. Al was preceded in death by his Wife Mary, Sons John and Stephen, Grandson Mark, Mother Clara, Father William, Brothers Wilfred and Bill, Sisters Mildred, Claire Ann and MaryAnn and Daughter-in-law Debra. Al was a brave, patriotic, faithful man. He loved his wife and family above all else. He was proud to have served his country and his church. He touched the lives of everyone he met and he never met a stranger. He will be missed greatly by his family and friend. "Quite simply, Al was one of the finest people I have ever met. A brave soldier by all accounts, a loving family man, and without shouting about his faith must have inspired many people by his example. At last he is now reunited with his beloved Mary and also Stephen and John." Barry Blostone