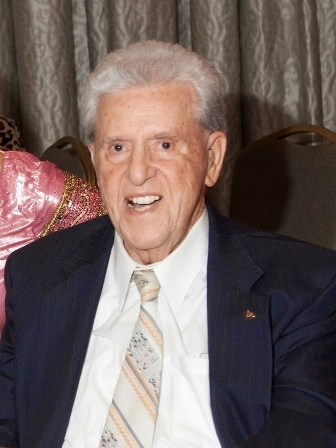 Mavros, Alexander, age 98 of Torrance CA, died on July 22, 2014 after a brief illness. He is survived by his loving wife Evangeline (Mackris) Mavros; sons Michael Mavros, John Mavros; and daughter Mary (Mavros) Abrams. He was blessed with nine grandchildren: Elaine (Mavros) Bucy, Alex Michael Mavros, Angela Mavros, Alex Charles Mavros, John Alexander Mavros, Michelle Katherine Mavros, Robert Abrams, Rachel Abrams and David Abrams, plus 8 great grandchildren. Evangeline celebrated 71 years of marriage with Alexander on July 4th of this year. A viewing and celebration of his life will be held at Rice-McCormick Mortuary, 5310 Torrance Blvd, Torrance CA on Sunday July 27 at 5pm. Funeral Services will be held at St. Katherine Greek Orthodox Church, 722 Knob Hill, Redondo Beach CA at 11am on Monday July 28. A luncheon will follow the Church services. For those who can go, there will be a motorcycle escort to Green Hills Memorial Park in Rancho Palos Verdes via Palos Verdes Drive for the internment. Alexander had multiple jobs to support his family. He put his two younger sisters through college and worked for American Motors and subsequently Chrysler Motors for 44 years. He would have worked longer but the Company required that he retire when he turned 70. In addition to being one of the first members of the Southern California Cretan Club, Alex served as President twice and held numerous board positions. He was a Master Mason for 65 years. Alexander loved his family dearly and never missed a family gathering. He will be terribly missed and all of us pray that his memory will be eternal. In lieu of flowers the family has requested donations be made to St. Katherine Greek Orthodox Church or the Church of your choice.