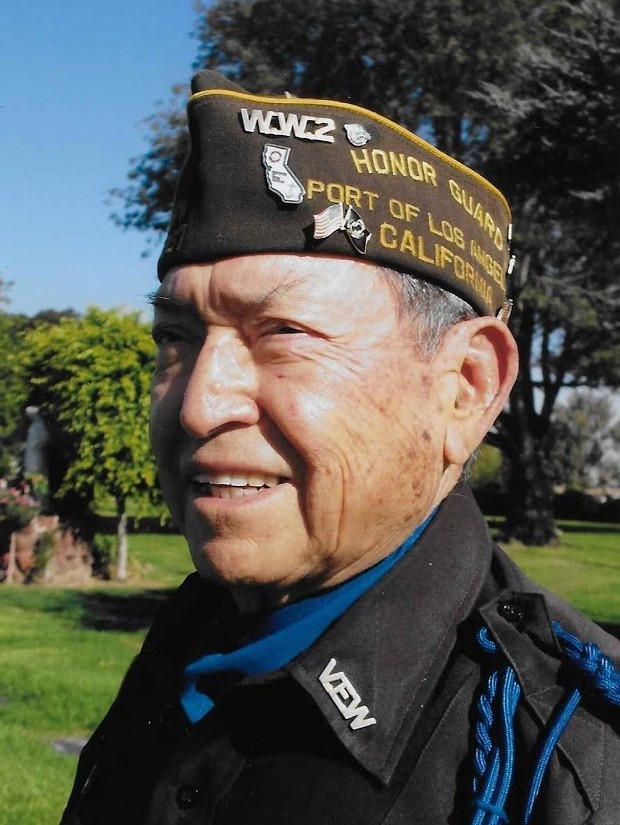 Alexander (Alex) Aguilar Calzada born in Etiwanda, California on February 26, 1927 to Francisca Serrano Aguilar and Eulogio Favela Calzada, led a fulfilling life in the South Bay. His parents came to Kansas for migrant work after the Mexican Revolution and settled in Santa Paula, Ventura County. Alexander was preceded in death by his parents, two brothers, Selestino (Tino, 75) and Gregorio (George, 72), and younger sister Monica (newborn), and a foster child Michael Joseph Gonzales (11). Survivors include his wife of 65 years, Rachel Vasquez (Ramirez) and brother Felix (97 years young); and children Michael, Paul, and Monica; and grandchildren Lauren (Josh) Davidson, Annika (Christian) Sanchez, Jackson Kimble, Callah Kimble and Joel Kimble; beloved great-grandchildren Abigail Sanchez, and Caleb, Shiloh and Luke Davidson as well as his many nieces and nephews and their families. Alex served in the US Navy from 1945 to 1951 as an enlisted Seaman, Gunners Mate II aboard several destroyers: USS Mustin DD413, USS Isbel DD869, USS McGowan DD678, and the supply ship USS Genese AOG8. He pursued lifelong learning encouraging his children, nieces, nephews, and grandchildren to seek their education. At El Camino College he obtained his AA degree which allowed him to advance from a painter at Douglas Aviation and North American Aviation to a machinist for the LA Harbor Department. He became a journeyman welder for LA City and helped maintain the Vincent Thomas Bridge. A Redondo Beach resident from 1953 onward, he built a larger home in 1964 for his growing family; with family and friends he relocated the original wooden garage, calculated the proper drain slope for a new sewer line, dug the trench and built perimeter cement block walls that still stand. He attained 4th Degree standing in the Knights of Columbus, was a member of the Tin Can Sailors Association and the Veterans of Foreign Wars Post 2967, Wilmington. He attended burial services and flag ceremonies throughout the Southland as one of the post’s renowned Honor Guard. An avid reader he enjoyed historical non-fiction including the memoir of Bernal Díaz del Castillo, the biographies of presidents and Frida Kahlo. His love of consuming daily news, the Scientific American and the National Geographic is legend. A survivor, Alex succumbed to brain cancer discovered in April 2018. His final year gave daily to his family demonstrating grace, humility, enduring strength and an ever present hope for the future. The family expresses sincere gratitude to the staff, nurses, clinicians and doctors affiliated with the Torrance Memorial Medical Center. Celebrate his life by devoting yourself to a local cause and leave the world a better place for others. Memorial services will be at Rice Mortuary, 5310 Torrance Blvd January 3, 2019 from 5 pm to 9 pm. Rosary recitation will start at 7 pm. Mass will be at Our Lady of Guadalupe Church, 244 Prospect Ave, Hermosa Beach January 4, 2019 at 10 am. Burial following at Pacific Crest Cemetery, 2701 182nd Street, Redondo Beach, CA.