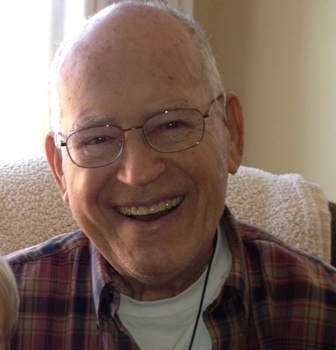 Born May 7, 1925, in Roseburg, Oregon, the youngest of Howard W. and Zelpha Sayers' ten children. He loved the farm life in Oregon but when the family moved to Great Falls, Montana, he became an avid ice skater on frozen ponds while finding time to finish most of high school. At the outbreak of WWII, Al was attending Queen Anne High School in Seattle and working part-time jobs while trying to convince his parents to sign his Navy enlistment papers---he was only 17. Finally his father was convinced and he was allowed to enter the Navy where he became a Petty Officer 3rd Class Signalman aboard ships. The Navy became the first great love of his life and he literally "saw the world" aboard Merchant Marine ships and Navy fighting ships. The Soloman Islands, Tasmania, India, Egypt, Iran, South Africa, Belgium as well as Philadelphia, New York, and New Orleans were included on his great adventure as a teenager. Following the war he entered Texas Tech in Lubbock, Texas, and met the second great love of his life Alice Marie Slater--- he adored her. By the time both finished their work at Tech they were ready to embark on the third great love of his life---as a Special Agent in the FBI. His 25 year career with the Bureau included assignments in Denver, Oklahoma City, and Los Angeles with exciting case work throughout. On November 22, 1963 he was ordered to Dallas to investigate the assassination of President Kennedy and returned home three months later. When they moved to Manhattan Beach a second time in 1970 Alice resumed teaching and Al became a Supervisor in the LA Office. He retired in 1976 and began his new career---Private Investigator. He and Alice enjoyed playing golf at Old Ranch Country Club but Al was never far from the next case. Al lost Alice after 65 years of marriage. He continued living in the family home and authored 9 books including "The FBI and I" before heart problems limited him. He passed on Sunday, February 8th, and will be buried at Riverside Veterans Cemetery. Al is survived by his children Bill (Anita) of Redondo Beach and Kelly of Jefferson City, Missouri; grandchildren Jane Drake of Billings, Montana, Matt Sparks of Adair, Oklahoma, Jared Sayers of Torrance, Michael Sayers of London, UK; and great-grandchildren Ian Drake, Emma and Pake Sparks, Jameson and Jonah Sayers. He was an honorable, faithful and loving husband, father, grandfather, and great-grandfather who taught us all well. Oh, the stories we can tell!