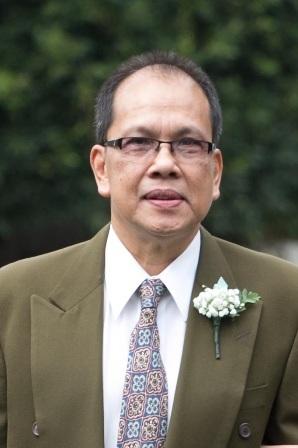 Born on November 24, 1950 in Angeles City in his native Philippines, Adelio Velasquez Catamisan was Bayani (Bining) and Cleotilde's (Tending) first child. "Adel", as they nicknamed him, brought his parents ultimate pride and joy. Two sisters followed, Belinda Catamisan and Erlinda Paprocki. Adel spent his childhood between their homestead in Angeles and Ternate, Cavite, his dad's hometown which they frequented during the holidays and summer vacations. Adelio attended elementary school at Holy Family Academy alongside his batch- mates and graduated in 1963. At HFA, "Del", as fondly called by his classmates, developed lifelong friendships with his "barkada", who remained a permanent fixture in his life. Del received his high school diploma from Don Bosco Academy in San Fernando, Pampanga with the Class of 1967. The family relocated to metropolitan Manila to accompany Adelio during his collegiate years. Adelio earned a Bachelor's degree in Economics at San Sebastian College in 1971. Del worked for the Philippine government until he traveled to Norway in 1977 to visit extended family. A year later, Adel made his way to Detroit, Michigan. It was there where he met his love, Teresita (Tessie) Reyes. By April 1979, they were married and shortly afterwards moved to Southern California. "Dale", as coined by his colleagues, worked for the aerospace industry as an aircraft mechanic for Northrop, where he thrived and prospered. November 8, 1980 brought a whole new meaning to Del and Tessie's lives when son, JV (Jan Vansdale) was born. Within a couple of years on September 18, 1982, JC (Jan Curtis) entered and completed their family. Fatherhood came naturally to him. Adelio also re-entered the life of his eldest son, Reggievic Tiongco Catamisan who previously lived in the Philippines. Del was a loving and caring "Dad" to the boys. In 1998, to avoid the narrowing of Adelio's artieries, he went through a procedure called an angioplasty wherein a stent was placed to improve his blood flow and help support his arterial lining. Del changed to a healthier lifestyle following this. Despite the shift in habits, heart surgery became necessary in 2008. Adel further adjusted his routine and embraced his fresh start by being completely mindful of his health. Earlier this year, Adelio celebrated a milestone with Batch 63 as they marked their 50th year reunion in the Philippines. Del and the barkada reminisced on their younger years and revisited their old stomping grounds. Adel and Tessie have been enjoying retirement together. After over 34 years of marriage, they took pleasure in the simple things in life and as a favorite pastime found themselves every so often at the local casinos. Unexpectedly, Adelio passed away on October 31, 2013. His death comes as a shock to all who know and love him and he will be missed tremendously. Dale will leave a lasting legacy with family and friends who can attest to his welcoming warmth, true-hearted thoughtfulness and silly sense of humor. Adel exhibited fervor for life and lived it to the fullest while at the same time epitomizing a loyal family man. Del's fun loving nature made him a delight to be around. Adelio Velasquez Catamisan – Adel/ Del/ Dale is survived by… Tessie JV, JC, and Reggievic & Frances Tiglao (daughter-in-law) Bely Catamisan and Erlie & John Paprocki (brother-in-law)